Angling for Abernethy ... or when Iain Abernethy came to town

Angling for Abernethy ... or when Iain Abernethy came to town

Thank you to Emily Coyte for writing this piece! It was originally written for the in-house magazine of Zenshin Dojo (www.zenshindojo.com). Chief Instructor Rob Jones sent me a copy and I asked if I could repost it here. Both Rob and Emily were kind enough to let me. The reason I wanted to repost the article is because it makes a great job of succinctly explaining some of the key points we covered that day. Hopefully readers will find it useful.

Or when Iain Abernethy came to town... 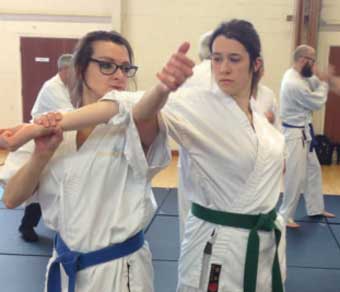 On the 20th February 2016, 6th Dan black belt and karate instructor Iain Abernethy returned to Bristol to lead a seminar for Zenshin Dojo and other clubs. Zenshin green belt, Emily Coyte, reports on her experiences and what she learned.

It may have been a chilly February morning outside, but the atmosphere inside the Grange School gym, in Warmley, was full of warm smiles, friendly greetings and eager anticipation of the up-coming session.

We were about to begin the second of Iain Abernethy’s seminars hosted by Zenshin Dojo – a trend I’m personally hoping will become an annual staple. With a similar format, but different content to last year, Iain taught real-world applications (bunkai) of Heian katas, interspersed with fascinating historical insights and practical self-defence tips.

One of the things I really appreciate about Iain’s teaching is how he keeps karate ‘real’. He frequently refers back to the realistic (but hopefully unlikely) situation of being threatened by an aggressor. To this end, he offered the following three-word mantra for any self-defence activity:

(Note: This is actually Marc MacYoung’s line, but I use it a lot because it succinctly expresses the right mind set and is a clearer way to express the traditional ikken hissatsu concept – Iain).

Allowing for gender alternatives, of course, this was one of many examples of Iain giving a clear and memorable perspective on a multifaceted issue. According to Iain, karate kata and bunkai weren’t designed to be a Mortal Kombat style chain combo where only the final move gets to ‘Finish Him’!

Instead, in a self-defence situation you should perform each and every move with the intention of finishing the fight. If that fails and your adversary is rude enough to remain upright, the next move is your contingency. Intend for that one to finish the fight. Once again: Him, down, now. This is important to remember because it’s very easy to simply relax into the routine of a familiar sequence, especially when practised repeatedly. Treat every move in every practice like it really matters, because one day it truly might!

Iain communicated other messages that have stuck with me, helping shift my perspective. He explains kata is not about fighting off eight villains arranged perfectly at points of the compass relative to you, just waiting for their time to attack. Instead, you can think about kata as instructions for how you ought to be oriented, relative to your opponent. The ideal situation, just like a gangster or cowboy standoff (and who doesn’t have those every once in a while?) is to have your opponent in your line of sight, but to be well away from theirs.

An aspect we revisited from the 2015 seminar was the importance of tactile awareness. To take someone down, you need to get close – properly close, not a polite six feet away. Keep an eye, or more importantly a hand, on them at all times during your defence. If you’ve got hold of my arm, you instinctively know, to a pretty amazing degree of accuracy, where the rest of my body is (including the squishy bits that’ll hurt most!), and also where I’m trying to go if I attempt to pull away or initiate an attack. So don’t let it go unless there’s a clear benefit or follow-up!

Between learning practical moves, Iain imbued us with historical insights that helped to satisfy my increasing desire to find out ‘why is that done this way?’ Of course, there is much lost to the vagaries of history, and Iain never claims otherwise. However, he still enlightened us with his deep knowledge, ability to extrapolate from historical contexts, and from what simply makes common sense.

While I got a lot out of actively putting his principles into practice during the seminar, I believe I could listen to him just talk about karate for hours. Thankfully I have recently discovered his extensive set of podcasts running back to 2006, so I intend to start putting this to the test! This is to say nothing of the hundreds of articles available for free on his website.

The messages may have been serious, perhaps even life-saving, but the session was relaxed, friendly and accessible. From chatting with various people after the session, it’s clear Iain has something for the whole spectrum of grades and interests. And, as ever, it was lovely meeting and training with people from other clubs, both within Zenshin Dojo and externally.

Thanks again to Iain for coming to Bristol, and also to Rob for organising the day. I’m already looking forward to next time.

It was a good seminar. And yes, very nice article.

I do love visiting the Zenshin Dojo always a wonderful atmosphere!

There were rather a lot of people for the size of the mat that day. I remember lying on my back having been thrown by my daughter and no matter which way I turned my head the air was completely full of flying bodies; it was like being part of a school of fish.