Scientific study finds karate is good for the elderly

Scientific study finds karate is good for the elderly

The paper found that, “a significant improvement in motor reactivity, stress tolerance, and divided attention only after the 5-month karate training period. Additionally, the results of the secondary study indicate further improvements after 10 months … We conclude that 5-month karate training can help to enhance attention, resilience, and motor reaction time, but a training period of 10 months is even more efficient.”

Here is the opening part of the paper:

Eighty-nine older women and men (mean age: 70 years) participated in this study. The participants were randomized into two intervention groups (karate group and fitness group, duration of intervention: 5 months) and a control group. All participants had to accomplish a cognitive test battery before and after the intervention. In a secondary study the karate group had an additional intervention for another 5 months.

The results show that there is a significant improvement in motor reactivity, stress tolerance, and divided attention only after the 5-month karate training period. Additionally, the results of the secondary study indicate further improvements after 10 months.

We conclude that 5-month karate training can help to enhance attention, resilience, and motor reaction time, but a training period of 10 months is even more efficient

Journal of Sport and Health Science wrote:
Our study focuses on East Asian sports including whole-body exercises on a high coordinative level and investigates a possible effect on the cognitive performance of older adults. Chang et al. postulate that Tai Chi improves cognitive abilities in older adults. The study by Dechamps et al. of frail older adults confirms that a Tai Chi training program (twice a week, 30 min) enhances the physical and mental state through the interaction of cognition and action.

Wagner studied the effect of a modified karate training of adults aged older than 50 years on physical and cognitive abilities and well-being. His findings show advances in short-term and procedural memory. He therefore concludes that appropriate karate training for older adults reduces fall risk and improves the subjective quality of life.

The study by Jansen and Dahmen-Zimmer analyzed explicitly the impact of karate training, including exercises with more stringent requirements in coordination, on the well-being and cognitive abilities of older adults. The results show only trends of improvements in memory performance but significant improvements in well-being. It should to be noted that the training group contained only 12 subjects and the interventions had a duration of only 3 months.

Chateau-Degat et al. examined 15 50-year-old men in regard to the impact of karate training on healthy well-being, balance, aerobic capacity, and cognitive abilities. However, a control group without intervention is missing. The results show that a karate training over 12 months has a positive influence on mood and perception of physical health. This was confirmed by a better postural control, improved performance on objective physical testing, and shorter reaction time of the non-dominant hand. 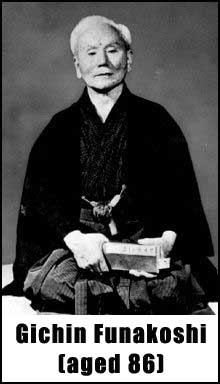 The paper then goes on to state that:

“From all these research findings we can conclude that a combination of aerobic, balance and coordination exercises leads to an improvement or maintenance of cognitive functions.”

The authors specifically selected to study karate because:

“From these we selected karate, because techniques can exercise relatively slow, weapons may not be used and therefore the risk of injuries for older adults is low … [karate] is characterized by aerobic fitness, coordination between arms and legs as well as between the right and left sides of the body at a relatively high level, continuous learning of new movements and orientation.”

Kata certainly has the elements listed while being safe. This is one of the things that really attracts me to karate: It is a whole life practise! It’s not something I have to give up as my body ages. The way I practise will change, and karate allows for that. It can be hard, austere and highly combative … but we can’t keep that up forever. As we age, we can continue to practise in a more age appropriate way; and still benefit from doing so.

I have an image that in my old age I will do a kata or two each day. It will be softer and less dynamic than I do it now, and the amount of live partner work and impact work will have been greatly reduced. I’ll train differently, but I’ll still be an active karateka following the common thread of kata.

To me, this is one of the huge positives of karate. You never have to “leave it behind”.

Not all martial paths can say this. Some can only cater for a certain time in one’s life before active involvement becomes unadvisable (i.e. boxing, MMA, etc). You can coach, but you can’t remain personally active because there is no mechanism to do so. There will be exceptions, but the majority of practitioners of certain martial paths will have to stop active practise as they become elderly.

It’s not good for most people in their 70s and over to get thrown to the floor, to have their joints locked, to take impact, or to hit things with force. Sure, do all that when young! I love that side of karate. But we also have a means by which we can continue indefinitely. To me, it is kata that provides that thread. Kata gives: Coordination and exercise for kids; a repository of combative techniques and principles for our adult years; and a means to remain fit and healthy in our old age.

“In the past, many masters of karate have enjoyed long lives. Karate aids in developing the bones and muscles. It helps the digestion as well as the circulation.” – Anko Itosu, 1908

“Master Itosu lived to the venerable age of eighty five, and Itosu to that of eighty. Master Azato’s own teacher, Master Matsumura lived to be over ninety years of age. Other contemporary karate experts such as Yamaguchi, Aragake, Chibana, Nakazato, Yahiku, Tokashiki, Sakihara, and Chinen, have all lived to be over eighty. These examples are indicative of the role of karate as a superior method of maintaining one’s health.” – Gichin Funakoshi, 1935

Good to see a study contradicting that story a few months ago which suggested that karate "shortens your lifespan". Thanks for posting it!

Andrzej J wrote:
Good to see a study contradicting that story a few months ago which suggested that karate "shortens your lifespan". Thanks for posting it!

Youre welcome! To be fair, this study does not mention lifespan and focuses on health, wellbeing and quality of life. What we can say it that this paper – which is subject to peer review and has followed the scientific method – does conclude there are positive health effects for the elderly through the practise of karate.

The book that claimed karate shortened lifespan was not a scientific paper and it was not subject to peer review. It also made claims which were false i.e. Itosu allegedly saying karate made you die young (see above quote), Funakoshi banned sparring (he didn’t), etc. Their conclusion was also contrary to other studies that had followed the scientific method.

There was a long discussion about it and that can be found here: http://iainabernethy.co.uk/content/karate-shortens-your-lifespan

The bottom line is that all the data in legitimate scientific papers tells us that karate is good for us now and in the future.

With you on that Iain!

My Karate will continue to evolve.....Karateka till I die!

Nice, the study kind of backs what Funakoshi stated 80 years ago in Karate-Do Kyohan:

"The nature of karate is such that it requires the body to move in all directions, in contrast, for example, to the emphasis on the arms in rowing or the legs in jumping. There is absolutely no need for concern about one-sided development of the body in karate, and the fact of uniform development may be considered to be one of the benefits of karate."

I collected some more of Funakoshi's statements on the merits of karate in my article "Karate-Marketing à la Funakoshi".

This is not exactly the same but of a similar nature. I recently wrote an article about living longer thanks to the Okinawans on my website. It was interesting to read that Okinawa has the most centenarians (those who live over 100) per 100,000 people in the entire world. They are doing something right to be living that long.

Good to see a study helping to confirm that martial arts is good for all ages!

Here were some of the articles I had found about Okinawans and old age:

At the New York Institute of Technology, where I used to teach, some physical therapy and medical college professors and researchers conducted research into the benefits of martial arts for the elderly and Parkinson’s patients. I do not know if they published their work, but I had some interesting conversations with one of the researchers, himself a tai chi and hapkido practitioner. His observations were similar to the ones highlighted in Iain's overview of this article, namely increased cardiovascular health, strength, mental sharpness, spatial awareness, neurological responses/health, and balance. I just did a quick search in my current university's research database, and there are quite a few articles in academic, peer-reviewed journals that discuss the various health benefits of karate and the martial arts for the elderly, Parkinson’s patients, cerebral palsy patients, children with special needs, and others. My sense from browsing the abstracts is that there isn't necessarily anything unique about karate and the martial arts; the common factors are certain types of physical and mental exercise/therapy. However, it is noted that the martial arts provides a comprehensive exercise regimen that works the body and mind in challenging ways with low injury rates (especially in the non-combative permutations of martial arts practice).

If you are interested, here is a video exploring how my sensei in New York, Kyoshi Jerry Figgiani, has used martial arts training to help a hit-and-run victim get a second chance at life. It is a touching, true story, and Jerry Sensei and Robert Aliano tour around America, giving inspirational presentations and seminars to high school students, teaching them about personal responsibility, believing in themselves, making good decisions, and perseverance. Key to Robert Aliano's on-going recovery from his accident is continued martial arts training. When doctors and physical therapists gave up and told the family that Robert would likely die, and if he lived he would never walk again, Jerry Sensei agreed to train Robert. Robert's hard work and perseverance in martial arts training have produced results the doctors never expected. Indeed, this is only one case, and there are many factors that have contributed to his recovery (medical, spiritual, physical, mental), but the martial arts have been central.