The World Health Organization has recently released a report on violence: 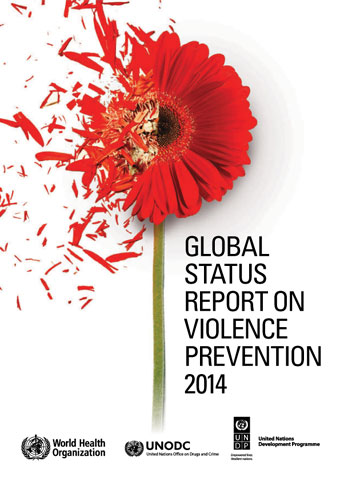 “The Global status report on violence prevention 2014, which reflects data from 133 countries, is the first report of its kind to assess national efforts to address interpersonal violence, namely child maltreatment, youth violence, intimate partner and sexual violence, and elder abuse.

The report can be downloaded from this webpage in a variety of languages:

Having read through it, here are some of the facts and statistics it includes:

6 million people have been killed in interpersonal violence since 2010: that more than in all wars combined during the same time period.

More than 1.3 million people worldwide die each year as a result of violence in all its forms (self-directed, interpersonal and collective), accounting for 2.5% of global mortality.

Homicide rates in the USA are falling, but are still 5 times higher (per person) than in the UK.

Worldwide, approximately one in every two homicides is committed with a firearm, and one in four with a sharp instrument such as a knife; although the mechanism of homicide varies markedly by region.

Fatal violence is not distributed evenly among sex and age groups. Males account for 82% of all homicide victims and have estimated rates of homicide that are more than four times those of females (10.8 and 2.5, respectively, per 100 000)

As just mentioned, 82% of all homicide victims are male. Most of these are aged between 15 and 29 years of age.

In 2013, 38% of all female homicide victims were murdered by male partners.

About 30% of ever-partnered women throughout the world have experienced physical and/or sexual violence by an intimate partner at some point in their lives.

One in 17 older adults reported abuse in the past month.

For people aged 15–44 years, violence is the fourth leading cause of death worldwide

The BBC have also produced the video below highlighting some of the findings.

The report is an interesting read and I recommend reading it. It gives a good global overview that is very useful when combined with the national and local statistics for your locality.