As promised, here is a video showing how I think Nodo-Osae should be performed based on both the text and the photograph found in Rentan Goshin Karate Jutsu.

Hopefully the video makes it clearer and I think this is a pretty good takedown that easily deserves a place alongside the nine of Karate-Do Kyohan.

Ulf Meierkord sent me this picture from a fencing treatise written by Fiore dei Liberi around 1400. As Ulf pointed out, the technique is similar to Funakoshi’s Nodo-Osae (a low grip combined with a throws push to cause a loss of balance). I love these commonalities across cultures and ages! 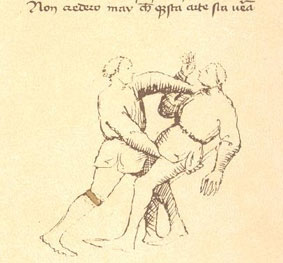 I think that extra step in the Kyohan yaridama, as Gavin mentioned, includes a bit of a turn, probably stepping outside or in front of uke's forward leg as you set your hip into theirs. Looking closely at the pictures, Funakoshi's right leg seems to have moved a bit between the entry and the lift, and his hip has been moved up and slightly forwards. He must have bumped uke up on his hip, because he's clearly lifted him clear of the ground somehow, and I'd be surprised if he could have got him up there just by lifting with the hand in the groin.

(I have the 1950s version of Karate-do Kyohan, which has all the pictures redone, and in its depiction of yaridama, uke's forward foot doesn't even leave the ground and his torso is clearly not in contact with the thrower's at all, whereas in the earlier pictures with Funakoshi, uke has actually come of the ground somehow).

Also, the angle of uke's body does look like he's going over Funakoshi's hip and not simply being lifted in the air beside him - notice how his feet are coming towards the camera; the angle between his body and Funakoshi's is a little steeper than it looks at first glance, and they're not just side-to-side.

If that's the case, then I think what we're seeing in (the original) Kyohan is basically the same yaridama as in Jutsu, just poorly explained and with the thrower's hips a bit more side-on to the opponent (kind of like how you lift for say, a hane-goshi in judo or jujutsu) whereas in Jutsu they're more fully turned through and uke is lifted further back on the hip.

There is so much karate in Fiore's abrazare... It's great. Lots of limb-controls and breaks, from what I've seen, that look like they came straight out of a karate kata - although obviously more heavily focused on grappling and bringing people to the ground than on striking, as befits a context where people might be wearing armour and/or pulling out daggers or swords all over the place.

Maybe it's just me, but compared to other medieval fencing sytems, Fiore always strikes me as somehow more karate-like, with his aggressively direct, simple solutions for closing off attack lines and seizing a very dominant position right away. Definitely got the "one-blow-kill, him-down-now" ethos going. His treatise itself is simply fantastic at laying out the system, too - as "deep" and efficiently presented as any kata, for sure, especially considering that it manages to cover everything from unarmed, unarmoured fighting, to using a dagger against a longsword, to fighting in armor with poleaxes, to spears, to grappling on horseback in full armour.