Someone please educate me as this is a term I'm hearing increasingly and don't think I understand. Just what are "combatives?" It seems like a generic term for systems of military origin such as Krav Maga and Kapap. Am I right? Or is it more than that?

This article might be of interest, it is Lee Morrison explaining the difference between martial arts and combatives:

From what I can tell "combatives" is just the another word that martial artists use to differentiate themselves. They focus on non-consentual violence, usually for civilians but sometimes for a military or law enforcement context. They do not train for sport.

The above article that Chris R posted was really good but after reading it I get the impression that it does a great job of describing what Lee Morrison thinks combatives training is, but not neccesarily what other people think combatives training is. Contrast to the Gracie Combatives system which is basically BJJ for self defence (not sport), and you'll see something similar but different. It could be argued that Iain-ryu practical karate is combatives.

Personally I use the term "combative" to mean "the violent part of self-defence" but that's just me. 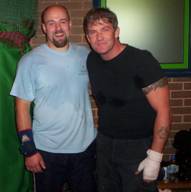 There’s never been a martial equivalent of the Oxford English Dictionary, so terminology is frequently self-defined and varies across the piece. Karateka can’t even agree on what “karate” is. I’m therefore sure there will be differences in opinion on what “combatives” is too.

Lee is a great guy who really knows his stuff. We would regularly train alongside one another in the early days of the British Combat Association (late 90s / early 2000s). He’s very impressive with a deep knowledge, impressive physical ability and superb teaching skills. His definition of combatives is one that resonates with me:

"The difference between martial arts and Combatives, is that martial art is something that you do with someone, in other words there is this reciprocal exchange of movement going on where he does this and I react by doing that, whereas Combatives are something that you do to someone or on someone. In other words I am going to take this sack of potatoes and just beat on it!"

There is no sparring, fencing or reciprocal exchange of blows the physical action on your part is completely one sided. I think Kelly's statement sums it up very well. It points to the mindset and well-defined goal of the Combatives trainee; that is to be single minded in your objective to defeat the enemy. Combatives were born out of real experience and designed purely to counter violence. Any method that worked by doing just that was considered combative.

MattG wrote:
It could be argued that Iain-ryu practical karate is combatives.

What I do certainly seeks to address non-consensual violence in a way that fits with Lee’s definition of “combatives”. That’s certainly what the old-school / bunkai side of things is too. People will have heard me say that, “Good bunkai is something you do to an enemy, not with a partner”. That’s a very similar sentiment to that expressed in the Kelly McCann quote above. There is therefore a “combatives element” in what I do when it comes to non-consensual violence. However, I also have an interest in the fighting and even the art aspects too. The key to me is to keep them distinct in practice so all elements can be enjoyed and benefited from without them “contaminating” each other i.e. taking consensual methods and ineffectively applying them to non-consensual violence (as so many martial artists do).

And that issue is that it sets up an unstoppable force meets an immovable object type situation. If two people of comparable skill bring that same attitude or goal to a situation then by definition both can't act it out at the same time. I think you will (fairly inevitably) get a "reciprocal exchange of movement" when one person can't decisively or easily beat or prevail over the other person as the other person is fighting back with just as much intent, vigour and skill as they are.

In other words that combative mindset and intent would help Lee Morrison or Iain prevail over me in a violent situation but not me over them (due to the vastly differing combative abilities). And if they had a situation opposing each other it would become a fight (a reciprocal exchange of movement).

PASmith wrote:
And that issue is that it sets up an unstoppable force meets an immovable object type situation. If two people of comparable skill bring that same attitude or goal to a situation then by definition both can't act it out at the same time.

It’s probably the one who initiates who will have the advantage and will be able to press the advantage to a decisive conclusion. That’s the way that non-consensual violence tends to go down. If the initial recipient is able to turn the tables, then it’s unlikely it will get turned back and forth into anything that would resemble as "reciprocal exchange of movement". The favored option of escape also makes it highly unlikely anything resembling a consensual flight would develop. We get out of there ASAP so the is no drawn out exchange.

The key difference is that we do all we can to make sure the enemy never get’s a turn. In fighting, we see a pulsing back and forth that permits the opponent to act.

It is of vital importance to emphasise seizing, maintaining and explosively exploiting the advantage, in order to felicitate clean escape, in non-consensual violence. These are the skills associated with “combatives”. We do all we can to prevent the enemy getting a turn. Combatives are all about preventing any exchange through domination and escape. Conversely, fighting skills are based on the premise of the us and the opponent agreeing to a reciprocal exchange.

PASmith wrote:
If two people of comparable skill bring that same attitude or goal to a situation then by definition both can't act it out at the same time.

Combatives are “shock and awe” via explosive violence. It’s simple and direct, and it works really well. If we allow a gap for the enemy to act then, more often than not, their own explosive violence will overwhelm us. This one of the reasons why a “fighting approach” fails in self-protection. As Peter Consterdine describes it, martial artists approach self-defense like they are sitting down to play a skilled game of chess (fighting), and then they are shocked when the other person throws the pieces at them and proceeds to smash their head in with the board (combatives). The fact the “chess player” has the most skill when it comes to chess is irrelevant.

It is interesting that you mention Lee Morrison. Until Saturday past, when I was apparently doing Combatives, I'd never heard of him. He was referenced and highly recommended at that seminar too.

Tau wrote:
It is interesting that you mention Lee Morrison. Until Saturday past, when I was apparently doing Combatives, I'd never heard of him. He was referenced and highly recommended at that seminar too.

He has hours of free material on YouTube which is amazing.  His video on the Amygdala alone should be required material for everyone.  As well as the physical side there are also vidoes of him giving lectures/interviews, it's all a fabouls incite.

If I had to level one criticism it woud be that he has a very male-centric view of violence.  The stuff on YouTube is based around bar brawl/street fight type scenarios.  But that's only the stuff on YouTube, which I am sure gives a very limited view of the whole.