Geophagy and the need for live bunkai practise

Geophagy and the need for live bunkai practise

Here is an interesting section from Gichin Funakoshi’s Karate-Do: My Way of Life in which he describes his clandestine training with Anko Azato:

“I taught school during the day and then, as the ban against karate was still being enforced, I made my stealthy way in the dead of night, carrying a dim lantern when there was no moon, to the house of Master Azato. When, night after night, I would steal home just before daybreak, the neighbours took to conjecturing among themselves as to where I went and what I was doing. Some decided that the only possible answer to this curious enigma was a brothel.

“The truth of this matter was very different indeed. Night after night, often in the backyard of the Azato house as the master looked on, I would practice a kata time and again week after week, sometimes month after month, until I had mastered it to my teacher’s satisfaction. This constant repetition of a single kata was gruelling, often exasperating and on occasion humiliating. More than once I had to lick the dust on the floor of the dojo or in the Azato backyard. But practice was strict, and I was never permitted to learn another kata until I had satisfactorily understood the one I had been working on.”

Many years ago, when I first read this, I was struck by the seeming sadism of Azato’s method of correction: “More than once I had to lick the dust on the floor of the dojo or in the Azato backyard.”

When I returned to it, I read it quite differently seeing it as being a turn for phrase (possibly a clumsily translated one?) akin to a skateboarder saying they “ate dirt” when they had fallen to the floor in a painful way.

We therefore have two ways of reading Funakoshi’s statement. We can read it literally such that Azato made Funakoshi lick the dirt from the floor for any error made in kata, or we can read it figuratively meaning that Funakoshi was unceremoniously dropped to the floor as a result of failing to understand the kata properly.

Funakoshi certainly does not give the impression that Azato was a cruel and sadistic teacher; quite the opposite: “It was my good fortune to be brought to [Azato’s] attention and eventually to receive my first instruction in karate at his remarkable hands.”

Throughout all of Funakoshi’s works he has nothing but praise for his teacher, both as a man and a martial artist. So it seems highly unlikely to me that Azato demanded Funakoshi get down on his hands and knees and lick the floor as a chastisement for errors made in the solo performance of kata!

It’s seems much more likely that it is indeed a turn of phrase, and that what Funakoshi is referring to is being unceremoniously slammed in to the dirt, or dumped onto the floor of Azato’s dojo. Immediately after his “eating dirt” statement, Funakoshi states, “I was never permitted to learn another kata until I had satisfactorily understood the one I had been working on.” This would infer that Funakoshi being dumped to the floor was a sign that the kata had not been fully understood. This would certainly be in line with Funakoshi’s views on kata stated elsewhere:

“Once a kata has been learned, it must be practised repeatedly until it can be applied in an emergency, for knowledge of just the sequence of a kata in karate is useless.” – Gichin Funakoshi, Karate-Do Kyohan

I therefore feel Funakoshi’s “eating dirt” comment is indicative of the idea that what shows true understanding of the kata is not the solo performance – which Funakoshi deemed as being useless when separated from function – but the ability to apply that kata.

As I read it, Azato would test Funakoshi’s understanding of a kata through a test of application. Funakoshi, more than once, found himself humiliatingly dropped to the floor, and that was undeniable proof that the kata was far from being understood. 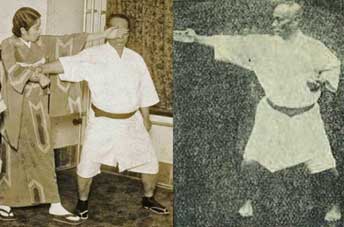 In an interview in 1936, Choki Motobu also describes the secret night time training of the past:

“Matsumora from Tomari and some others used to go to Katabaru at night when the moon was very bright. There they trained so hard that they could not even get up by themselves because of aching backs and legs. All their body parts were so sore, that when they reached their homes around dawn, they were unable to even crawl inside. So they lay down at the entrances where they fell asleep. They were too tired to go to their bedrooms. This was how hard they used to train in those days. They trained and studied kata and kumite at the same time.” - Choki Motobu, Ryukyu Shimpo

For the purposes of this discussion it is, “This was how hard they used to train in those days. They trained and studied kata and kumite at the same time” that is of most relevance. Again, we see the link between kata and kumite being emphasised.

(PHOTO 2: Motobu demonstrating Naihanchi kata and showing its application to a student)

Kenwa Mabuni (founder of Shito-Ryu) also experimented with armour to permit hard contact while keeping the sparring safe (PHOTO 3). However, he had his reservations about the armour and was concerned people would come to rely upon it: 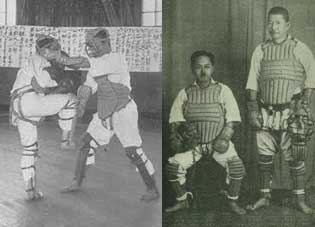 “The main disadvantage of the armour to date is that we are not fully able to use any part of the body as a weapon; which is the nature of karate. It is my hope that the current armour will be improved and with continued practice and research this problem can be overcome. In the meantime, those who use armour should not neglect the practice of kata in conjunction with prearranged sparring and free sparring without armour. Otherwise, you will come to rely on the armour. Consequently, you will miss the aim of Karate which is to be able protect yourself from an assailant.”

The need for live practise is emphasised throughout the writings of the past masters; as is the need to understand the link between kata and that live practise:

“Sparring does not exist apart from the kata but for the practice of the kata." – Gichin Funakoshi, Karate-Do Kyohan

"Kumite is an actual fight using many basic styles of kata to grapple with the opponent" – Choki Motobu, Ryukyu Karate Kempo

"Through sparring practice one may identify the practical meaning of kata." – Chojin Miyagi, Karate-do Gaisetsu

I think karate would benefit greatly from a return to this traditional view: The true measure of an individual’s understanding of a kata is not the aesthetics of solo performance, but how well that individual can apply the lessons of that kata. Skill in application is a concrete “real world” measure. However, judging a kata on solo performance alone means we are using an arbitrary and subjective criteria. It is not the “look” of the punch in the kata that counts, but how hard that punch hits. It is not the aesthetics of a throwing motion in the solo-kata that is really important, but instead it is how well we can actually throw people.

Solo-kata provides the syllabus for what we do. It also provides a good form of supplementary solo-practise. However, it’s no good if solo-kata becomes the goal of practise instead of being the “part of the whole” that it is intended to be.

It seems abundantly clear to me that function was the test of understanding that Azato applied to Funakoshi’s kata. Additionally, the link between kata and kumite is clearly expressed in the writings of many of the past masters. For clarity, we are not talking about kumite based on the rules of modern competition, but kumite based on the nature of real conflict and kata (as described by the masters of the past). 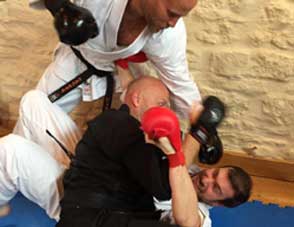 In Karate-Do: My Way of Life, Funakoshi describes the close relationship between Tegumi (Okinawan wrestling) and karate. He describes bouts where he and others would fight to unconsciousness, submission (tapping out), or the intervention of a “referee”. He goes on to say that they would also engage in such bouts with multiple opponents and “It is hard to think of a better way than this to learn how to defend oneself against more than one opponent.” I agree! Funakoshi did it live and so should we.

When I wrote my first book in 2001 I discussed this “kata-based sparring” idea and the vital need for bunkai drills to progress into live drills. And while bunkai is getting more and more popular, I think the need for live practise has not yet been fully embraced. KBS (karate-based-sparring) is practical, fun, safe and hugely beneficial when correctly structured. It is a vital part of making karate work and, as we have seen, it has its roots in traditional practise.

(PHOTO 4: A live multiple enemy drill from a recent residential course. Traditional, fun, beneficial, and a great way to bring home the dangers of being on the ground if there is more than one person).

Azato seems to have regarded the functional application of kata as being the ultimate measure of understanding: you could not move on to another kata until practical application has been demonstrated. Funakoshi said kata without application was “useless” and that sparring existed for the practise of kata. Motobu tells us that kata and kumite were always practised side by side, and that in kumite we use the technique of kata to grapple with our opponents.  Miyagi tells us that is in sparring that we come to understand the practical application of kata. Funakoshi tells us that live practise against multiple opponents is the best way to learn to protect ourselves from multiple opponents. And so on.

We need to ensure we embrace all of this and include live practise as an inextricable and vital part of kata. It is then, and only then, that kata can truly live and breathe and its value become fully realised.

NOTE: “Geophagy” is the eating of dirt; just in case you were wondering what the title was all about :-)