Iain and the Shaolin Monks!

Well last night I went to see Shaolin monks perform their “The Spirit Within” show. It was awesome!

My family and I were lucky enough to be able to sneak into the theatre before to show to see the Shaolin monks warm-up. Russell Goold had kindly aranged this and the warm-up was massively impressive in itself and gave us a taste of what was to come. The warm-up consisted of stretching, kicking, acrobatics and more, all to a booming punk rock soundtrack over the theatre’s sound system! I was unsure if the music was the choice of the sound team or the monks, but the sight of one the monks playing “air drums” reassured me the music was fine with them either way. 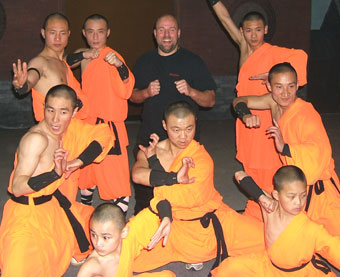 It was nice to see them laugh and joke with one another while simultaneously correcting imperceptible errors in each others seemingly flawless movements as they prepared for the show. It was very obvious that they love what they do, have a sense of humour, care for one another, don’t take themselves too seriously, and yet are incredibly serious about what they do. Traits I’ve observed in all the great martial artists I’ve came across.

The show itself started around 20 mins later and the place was completely sold out. The set, scenery, music and lighting were all superb and made the experience all the more impressive. The show followed the journey of a child entering the temple and his progression therein. The first scene had one of the children flipping from his feet onto the top of his head and then back onto his feet again. My own children were hugely impressed by this and I made a mental note to tell them not to try that at home!

The strength, skill, flexibility and agility demonstrated throughout the show was genuinely jaw dropping. At the interval my daughter went through almost everything demonstrated and asked, “How did they do that?” The dad of a five year old daughter is supposed to the fountain of all knowledge and I could tell my stock answer of “lots of practise” was not what she was hoping for.

The second half was every bit as impressive as the first with some great stunts and superb showmanship. There were lots of oohs, aahs, and gasps as the monks balanced on swords and spears and had various items smashed against their bodies. I was also very impressed by the weapons display, particularly how close the spears got to the heads of the monks as they bobbed and weaved the lightening fast thrusts of their colleagues. A half inch either way, or a fraction of a second earlier of later, and someone would have got a spear to the face!

The whole show was superb and highly recommended to anyone wanting a great night of unforgettable family entertainment. Ideal for a dojo social night too!

If I’ve not convinced you to go yet, let me tell you what Barnaby the bear said of the show! Barnaby is the teddy bear my daughter took to the show and, with her acting as his interpreter, Barnaby told me it was the best thing he had ever seen. Praise indeed!

Thanks to Russell, Chris, Han Wen Qiao, and the monks for a truly amazing evening.