An intersting study of the violent injuries treated in walk in A&E departments.

Thanks for sharing this. Interesting stuff! Two things jumped out at me straight away:

Violence and Society Research Group wrote:
Overall in England and Wales, serious violence decreased by 12% in 2013 compared to the previous year. Levels of serious violence have fallen every year since 2008 according to this measure.

This does not get publicised enough. Violent crime is dropping and overall things are better than they were. Awareness of the issues and proportionate everyday precautions are a must. However, exaggerating the threat in our minds to the extent of unfounded pessimism and paranoia are also unhealthy and damaging to individuals and society. I feel that some sections of the martial arts community are prone to exaggerating the threat and hence create an environment that fosters unhealthy everyday fear.

I use the diagram below to sum this up when teaching self-defence courses. 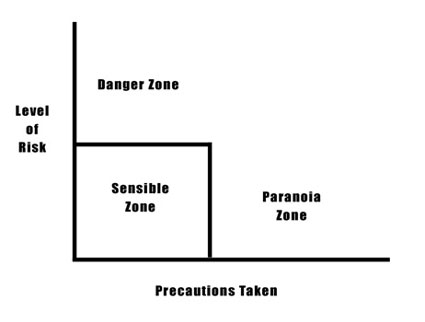 Violence and Society Research Group wrote:
Those at highest risk of violence related injury were males and those aged 18 to 30.Violence related ED attendance was most frequent on Saturday and Sunday and least frequent during the months of February and November.

Same old, same old. Young males getting drunk at the weekend and fight as a result. As we always see; one of the most effective ways to avoid violence is to grow up and drink less.

The fact that the martial arts can foster a positive lifestyle is often one of the most effective contributions to “self-protection” that they can make.

It’s also interesting to note that the “festive period” would seem to the most violent time of the year (December and January).

Thanks once again for sharing!

I agree reported and actual violent crime is dropping due to a wide variety of factors and the trend is it to be more concentrated around certain times and certain areas and pastime activities. (I have excluded violence used in personal robbery as the robber is predominantly sober and not necessarily have a drug problem).

Certainly in London regarding knife crime (which is predominantly youth on youth violence) has dropped and the murder  of young men by young men has dropped significantly from its peak in 2009 of 28 to 2014 to 6 (5 by stabbing) a combination of focused  law enforcement effort ; education and prevention.

The link between alcohol and inter personal stranger violence as well as ‘the victim knows the attacker’ has been clearly demonstrated and an excellent and easy read report to read is ‘Alcohol and interpersonal violence by the World Health Organisation.

A Home Office research paper in 2003 called ‘alcohol crime and disorder a Study of young adults’ tell us what our gut instinct knows. one in five violent assaults take place around pubs and clubs 70% at weekends, 47% of victims stated their attacker had been drinking ( I do believe that figure has been fairly consistent).  The victim and the attacker are roughly the same age.

For stranger violence the attacker was in 62% of cases under the influence and anecdotal evidence puts that figure and personal violence figure a lot higher some say 80 %.

Note I have not included the issue of violence used in personal robbery which is very different in terms of  the robber is nearly always sober.

I agree with Ian’s conclusion; grow up drink less but I would add a slightly controversial other to prevent opportunists robbers; try not to travel home on public transport especially in London when drunk. However to put this in perspective two observations.

A few years ago I wrote an article using a mixture of hospital A and E statistics and crime figures to establish what the most likely type of personal assault. By using reverse engineering  (what area of the body was treated for injury when the persons injuries were caused by assault). The evidence supported what we know and actually confirmed certain myths. I will make it available here if people would like to read it.

sarflondonboydonewell wrote:
an excellent and easy read report to read is ‘Alcohol and interpersonal violence by the World Health Organisation.

Here is a direct link to that report for interested parties: