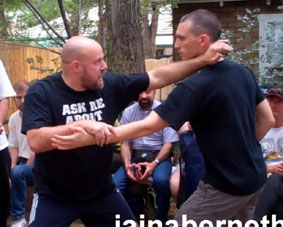 This video was filmed in July 2011 at Marc and Dianna MacYoung’s annual Animal List BBQ in Colorado, USA. It was an amazing four days spent in the company of many highly talented people. I taught for a couple of hours on the Saturday where I covered general kata principles. This clip shows a little of our discussion on “two-handed fighting”.

It’s vitally important to understand that the methods in kata are not designed for a back and forth exchange at distance (such as we may see in martial sports and consensual fights), but instead to navigate the chaos of close-range civilian conflict. Therefore, in kata we do not see passive “guards” or inactive hands. The range necessitates that both hands are active.

When we are looking at strikes in kata, the non-striking hand will generally be active doing one of two things:

1 – Clearing and controlling limbs such that the karateka is in a position of advantage and has an unobstructed path to the head and neck of the enemy.

2 – Locating the head of the enemy so that in the chaos of conflict accurate strikes can be delivered to induce unconsciousness.

The common notion that the hands are held in “guards” or “ready positions” in kata is not correct and spills over from people incorrectly viewing kata as a record of “karateka vs. karateka” duelling; as opposed to a record of the methods to be used for civilian self-protection.

In this video I discuss the general idea of “two-handed fighting”, and the key roles the non-striking hand will play, using the examples of Shuto-Uke (“Knife-hand”) and the elbowing method found in kata such has Pinan / Heian Yodan, Kushanku / Kanku-Dai, Naihanchi / Tekki Shodan, etc.

I hope you enjoy the video!