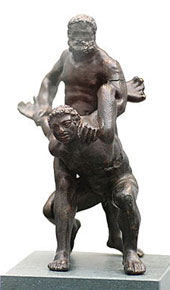 Every once in a while, someone in the martial arts claims to have created something totally new. However, often as not, a look through the history books shows that it is not so much “new” as “generally forgotten”.

I think this is succinctly captured in the following line from the book “Asian Fighting Arts” by Donn Draeger and Robert Smith:

“There is nothing new under the sun … nothing, that is, except the very old.”

As an example of what I mean:

Pankration was a Greek sport introduced into the Olympic Games in 648 BC. It was a mix of punching, kicking and grappling which had few rules (no biting, no eye-gouging, etc).

Plato – yes, that Plato – subsequently wrote that he objected to the amount of time spent on the ground in these matches because it “did not teach men to keep their feet” and was therefore, “useless for military training”.

2641 years later and the first UFC is held and it too had few rules (no biting, no eye-gouging, etc) … and it’s not long before people follow in Plato’s footsteps by stating the amount of time spent on the ground makes such training not ideally suited for civilian or military use.

This is just one example of many. We can see repeating patterns in the martial arts and I think Gichin Funakoshi expressed this nicely when he wrote:

“To search for the old is to understand the new. The old, the new. This is a matter of time.”

While some would argue that the “new” is better than “old”, and others that “old” is better than “new”, I think we need to be both. Bunkai practise is both “new” and “old”. My karate aspires to be simultaneously modern and ancient. To be stuck in the past is as unhealthy as being “cut off from your roots”. Either way prevents growth.

The ideal then, for me at least, would seem to be seeking to be both old and new.

Great point. Reminds me of this quote:

"Tradition has never been about blindly following the men of old, or preserving their ashes in a box, but rather in keeping the flame of their spirit alight and continuing to seek out what they sought in an effort to keep the art alive and functional"- Patrick McCarthy

By way of contrast I have collected quite a few old martial arts books, generally wrestling, physical culture, ju-jitsu, jiu-do, etc. from the early 20th century and beyond. By a variety of authors. And it's remarkable how much they back up cross training, looking to other arts and being competent in all ranges. Which is ironically something the UFC and MMA brought back into vogue after many arts became overly specialised (kicking, punching, grappling etc) in the mid 20th century. They are often full of pearls of wisdom that should have been used as pointers that becoming good at one thing left avenues for someone more versatile than you to exploit. But seemingly they were ignored.

Zach_MB wrote:
"Tradition has never been about blindly following the men of old, or preserving their ashes in a box, but rather in keeping the flame of their spirit alight and continuing to seek out what they sought in an effort to keep the art alive and functional"- Patrick McCarthy

PASmith wrote:
And it's remarkable how much they back up cross training, looking to other arts and being competent in all ranges. Which is ironically something the UFC and MMA brought back into vogue after many arts became overly specialised (kicking, punching, grappling etc) in the mid 20th century.

Absolutely! You look back at almost all systems and you can see that they were more holistic in the past. We therefore end up “going back” to go forward.

It will be interesting to see if the cycle repeats again with greater specificity and extremely high levels of skill in a given area becoming valued.

Mixed Martial Arts is already becoming less of a mix of martial arts and more of a specific system (with specific goals) in its own right. A couple of decades ago if you said you did mixed martial arts; people would ask which mix of martial arts you practised. Now “MMA” is a sufficient answer in itself. What became known as “karate” was originally a mix of differing Chinese and Okinawan systems … and as we know from experience that definition can lead to limitation.

Judo has made strong moves to take out the “wresting” influence by prohibiting leg grabs; so we can see increased specialisation there.

I also think we are seeing a move once again toward the increasing recognition of the non-combative aspects of the martial arts i.e. health benefits, stress busting, character development, etc. Will the “do-ethos” become the overarching trend again and have the same impact it did one-hundred or so years ago?

Who knows? I guess all we can be sure of it that change will always occur, and when it does happen very little is truly “new”.

where did you get the Plato quote from? Im a huge fan of his, so would love to know!

Ironically, my instructor were just talking about this in regards to working out.  Back in the 40'2 and 50's it was called calisthenics, then arnold schwarzenegger and other body builders popularized "isolation of body part" training, now 'functional" or "core" training is popular, which is basically variations of "calisthenics."  Point being, "what goes around, comes around."

Great thoughts, static "tradition" is a complete myth, things just keep a -rollin and they don't ever stand still.

One thing that is very unique today (in all walks of life really) with martial arts is media influence, which colors a huge amount of what people think about martial arts, violence, etc.  I don't know that this is so, but I suspect that our distance from violence (for most people at least, not a bad thing!), coupled withmedia-driven violence fantasies and distortions creates a really, really weird environment for figuring out what is "real". That's why well thought out, progressive martial arts material is so valuable.