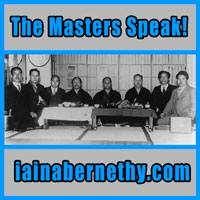 Welcome to the October 2012 iainabernethy.com podcast! This podcast is titled “The Masters Speak!” and it covers twenty-five or so of some of my favourite quotes from the works of the past masters. In the podcast we include the words of masters such as Itosu, Funakoshi, Otsuka, Mabuni, Motobu, Kyan, etc. What I hope these quotations show is that much of what is regarded as “traditional” today is not that traditional!

The quotes show that the masters of the past thought that kata without application was “useless”, that karate training should include locking and throwing, that the directions in kata have nothing to do with the angle of attack, that the idea of the kata being for multiple “opponents” who attack in turn was “nonsense”, that awareness and avoidance training is vital, that we should hit first once conflict can’t be avoided, that there is no such thing as a “pure style”, and so forth.

It’s all stuff that those listening to these podcasts are likely to agree with; and yet those like us often find ourselves labelled as “revisionists” or “mavericks”. The fact is though that the more pragmatic and holistic approach which we subscribe to is actually far closer to what was being practised in the past than the “traditional karate” of today.

I hope you enjoy the podcast and I’ll be back with more next month!