The Magic of the Left Jab ebook for FREE!

The Magic of the Left Jab ebook for FREE!

Just to let you know that John Nawn's e-book 'The Magic of the Left Jab' is FREE for Kindle download for the next 4 days! This book contains a lot of great information for beginner and expert alike -there's a lot of master strategy and street fighting skills to be seen here. A link to 2 free videos with some excellent training drills is also included in the e-book.

You have absolutely nothing to lose. 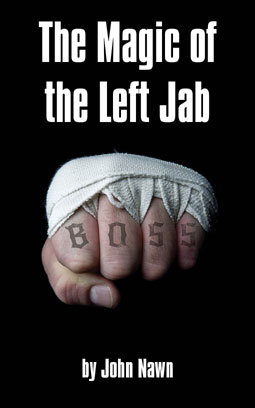 This book is titled the “Magic Of The Left Jab” for a very good reason.

IT IS IN FACT A MAGICAL PUNCH!

The left jab is a much under-estimated and under- utilised strike.

The left jab when used to effect with good footwork can be a fight winner.

It can be used in so many different circumstances including but not limited to :-

• FEELING OUT YOUR OPPONENT AT THE START OF A FIGHT.

• MOVING IN BEHIND THE JAB TO CLOSE THE DISTANCE BETWEEN YOU AND YOUR OPPONENT.

• JABBING YOUR OPPONENT OFF AS HE RUSHES AT YOU.

• WEARING YOUR OPPONENT DOWN PHYSICALLY BUT JUST AS IMPORTANTLY MENTALLY.

• THE JAB CAN BE A KNOCKOUT PUNCH.

We will discuss all this and much, much more in this e-book.

Additionally, when you buy this e-book you will receive a link to two youtube videos that will demonstrate some vital exercises with the left jab.

Thank you so much for making this available!

For those of us in the US, here's the Amazon.com (US) link: http://www.amazon.com/The-Magic-Of-Left-Jab-ebook/dp/B00TA3DJOC/ref=cm_s...