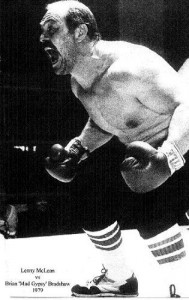 Here are a few interviews with Lenny McLean (AKA "The Guv'nor”). I was looking for the first one today as it makes some very interesting points about the reality of conflict.

For those who remember (the clip is around 20 years old) this bit of footage was part of a documentary following “the interviewer” (don’t know his name) in his quest to become a name in the world of illegal fighting. As it turns out, he was a fake and all the fights had been staged (which is pretty obvious when you see them). He was rumbled half-way through filming when one of his opponents was recognised as being one of his friends from earlier in the filming. Anyhow, Lenny McLean is real deal, even if the interviewer was not.

I recall an article on Lenny McLean in Fighting Arts International where the writer suggested that had Lenny been born in Okinawa he would have been regarded as a karate master. I can see that. There are some, who perhaps have an unrealistic and idealised view of violence, and a similarly idealistic view of the old masters, who would dispute that. However, I would say we need to look at things from the perspective of ability and practicality.

Watch the clip and see how explosive and pragmatic everything is. Notice the close range and how the limbs are controlled for the headbutts and bites. It’s impressive stuff. Also notice that he makes reference to his poetry and (in the following clips) there is a clear moral code that he operates to and he ultimately feels violence is futile and detestable.

He comes across as a very nice guy (his book is well worth reading) and it has been said that a true martial artist is someone whose “smile can warm the hearts of little children and whose anger can make tigers cower in fear”. Lenny would seem to fit that criteria.

Here are some of the key points to draw out of Lenny’s hard won wisdom:

7 – Fighting is not a good way to spend your life (in one of the clips below he also says “I detest violence”).

I hope you enjoy watching the above clip and it proves thought provoking about the reality of violence and this very intresting man. I’ve also embedded further clips below for more details and insights.

Ruby Wax interviews Lenny on British Television (“who are the real animals”).

Short interview where Lenny talks about the difference between a “straightener” and “all in”.

Short Interview with Lenny after he began acting (including a bit on his childhood).

You can find our more about Lenny McLean here: http://en.wikipedia.org/wiki/Lenny_McLean

He's definately one for the "Skill always trumps aggression" boys to ponder on.  (Although he had masses of both)

He comes across as an affable person which is true of most martial artists that I know; they don't have to prove anything. He is also a true gentleman who only fought "to put food on the table".