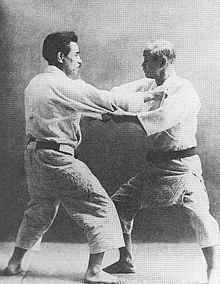 After graduation, Mifune was sent to a Tokyo preparatory school, anticipating entry into Waseda University. He immediately attempted to join the Kodokan. In those days, this required a personal interview with Kano, upon the recommendation of ranking judoka, and then signing a blood oath. Mifune did not know anyone at the Kodokan, but picked out Sakujiro Yokoyama, who then had a fearsome reputation, as 'Demon Yokoyama,' whose fast, powerful judo had gained much reputation for the Kodokan.  Mifune literally camped at Yokoyama's doorstep until the latter consented to recommend him to Kano.  In July 1903, Mifune joined the Kodokan.

After 15 months of training, Mifune achieved the rank of shodan ('beginning dan,' indicating 1st dan ranking) in Kodokan judo, and after the remarkably short time of four more months, nidan (2nd dan). Through timing and speed, Mifune quickly gained a reputation, and was never defeated at the annual Red and White Kodokan tournament. By 1912, he was ranked rokudan (6th dan) and an instructor. He was already being called the 'God of Judo.'  He was 30.

During the next 20 years, Mifune's reputation continued to grow. When he was 40, he was challenged by a 6' tall and 240 lb. sumo wrestler. Mifune, 5' 2" tall and 100 lb., finally slammed the wrestler with his trademark 'airplane' throw (kuki nage or uki otoshi). He ate sparingly, slept on a Western-style bed, and did not smoke. In 1937, Kano promoted Mifune to the rank of kudan (9th dan).

With Kano's death in 1938, Mifune became the most influential instructor. Students had long complained that Mifune would get carried away with lectures, and he was "feared more than loved." On May 25, 1945, he was promoted to judan (10th dan), the fourth of 18 judoka to ever be so honored/

Mifune died on January 27, 1965, in the Nichidai University Hospital in Tokyo.

I'm fairly certain that Mifune Sensei was a wizard--on the tatami, at least. When I started training in judo, I heard about him, and when I finally saw this video I was astounded. Great stuff!

Just watching a little more of this while having a coffee … check out the knee lock submission during randori at 31:40. Leg-locks now being totally omitted from competitive Judo; it’s a shame to think such things are being lost.

Hey Iain, judo is losing a load of things in, I think, a desperate attempt by the governing body to distance itself from other Olympic combat grappling sports.

Kind of history (at least karate's) repeating itself. For instance, we're no longer allowed to grab at all below the belt in tachi waza. So loads of throws are being revised or discarded.

Yes i've heared different objectives for the rule changes in Judo, creating a more pure Judo in competition, as a result attempting to go back to its roots.

It seems the rule changes have brought about a higer Ippon percentage in competition, from my experience & research, but seeing this video it's interesting that a lot of techniques are not only banned in comps but not practised in the dojo whatsoever.

a wonderful treasure-house of techniques from Mifune sensei! :-)