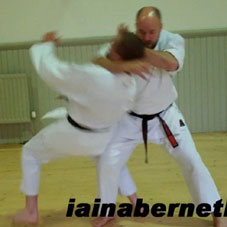 Kubi-Wa (Neck Ring) is one of the nine throws Gichin Funakoshi presents in his book Karate-Do Kyohan. Funakoshi shows the throw following a block and palm-heel to the chin with the same hand that then encircles the neck.  He also states that the palm-heel to the chin is optional and one could flow straight into the throw. In this clip I use a forearm slam across the chest to set up the throw; which is how the throw appears in Kushanku / Kanku-Dai.

The sequence we are looking at is the final “nuki-te” in the kata, the bending of the arm, and the movement of the back leg around into the following horse stance. The arm across the chest pushes the enemy’s arm out of the way. We then project forward and slam the arm across the enemy’s chest (the spear hand). This is not a strike with the tips of the fingers, but a strike with the inside of the arm. It’s important that the arm is not swung in on an arc, and that line of the kata is followed. This will help break the enemy’s balance. The neck is then encircled – which is why the throw is called “neck ring” – and the enemy taken to the floor.

I find moving the back leg, as per the kata, adds to the power of the throw; but it is possible to do the throw without it (which is how Funakoshi shows it). I also like to push on the face as the enemy falls in order to add to the throw, locate the enemy’s head as they fall, and to help reduce the chances of the arm being seized as the enemy falls.

Some may object to my varying of Funakoshi’s throw, but it is worth remembering that Funakoshi himself encouraged us to do just that:

“Whether throwing or using joint locks, there are innumerable variations, and the important thing is to adjust according to the opponent; so the way all these techniques are used is left to the discretion of the student.” – Karate-Do Kyohan

This is therefore my personal take on the Kubi-Wa throw and I hope you find it useful in your own personal exploration of the throw.