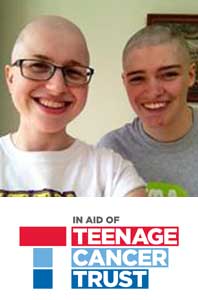 On Saturday and Sunday 14th 15th November, Team Black Belt invites you to take part in our 24 Hour Karate Marathon. No, you don’t have to do all 24 hours, it’s up to you, train for just a couple of hours, or all evening, what about an all-nighter?

Instructors at the event have given their time up for free and all we ask is that you make a donation to The Teenage Cancer Trust, the unit that is helping our 21 year old, Sensei Tanya, with her battle against Ewing Sarcoma.

Sensei Barry Tatlow 8th Dan Chief Instructor of Phoenix Karate started training way way back in the 60s with Tatsuo Suzuki before training under the legendary Peter Spanton and Toru Takamizawa. A former International Kumite and Kata Judge and vice chairman of what is now the EKF.

He has lead Phoenix Karate organisation for over 30 years passing on a wealth of knowledge and has taught over 500 students to black belt grades and higher. He will be there to pass on his knowledge and experience to all those who attend.

Think - Tom Cruise in The Last Samurai and you are almost there.

Shepherd Sensei has a strong interest in Japanese martial arts, which began at a young age. As a child he studied Karate and eventually gained his black belt. In his early twenty's he traveled frequently to train with some of the world’s best martial art masters. In doing so he gained extensive experience in Aikikai Aikido, Shodokan Aikido, Aikijujutsu and Traditional Jujutsu. His travels eventually led him to Obata Sensei who upon watching him demonstrate his technical prowess, he made it his life’s mission to train with and learn everything he could from this martial arts master.

Former England International under Ticky Donavan Ian is known as the “Karate athlete” Ian asks “how can I gain the greatest impact with the techniques I practice?”

This was the question former England karate international Ian McCranor asks himself in his early days as a karate student. Are you punching for the exercise or does the punch serve a purpose? “ I love karate, especially traditional competition, but adding boxing to my syllabus was a game changer” Ian will be teaching a “boxing for beginners” designed for the karate student.

Is the owner and principal instructor at the massively successful East West martial Arts in Northampton and my inspiration for Team Black Belt.

He will be teaching in this session on

"How to Quadruple your Teaching Skills to Consistently Teach Great Classes".

In my opinion Sensei Nigel is a truly world class instructor and Teacher, I for one will be paying very close attention in this session.

Garry Smith is the real deal, you will love what he teaches and how he teaches it.

“Andrew  is a great instructor. He has a solid background in traditional karate, he understands how this art was meant to be practised in the past, and he understands how to ensure cutting edge relevance in the modern world. Andrew refuses to rest on his laurels and is always seeking to further his martial arts. As a result, students of Andrew’s get broad, enjoyable, effective and informative instruction; delivered in an enthusiastic and inspiring way. He is highly recommended.” Iain Abernethy 6th dan BCKA

Author of the best-selling “From Shotokan to the street”

Andi Kidd teaches Application Based Karate for Self-Protection to both groups and individuals.

As well as teaching the physical skills that are inherent in karate in a practical manner, Andi Kidd wraps this into a package that addresses the need for the capabilities that will help you avoid the situations and if the need arises, how best to escape.

Andi’s enthusiastic yet relaxed style of teaching engages students and makes use of their personal skills in developing and applying karate in their own way enhancing their abilities and knowledge.

Andi Kidd is ranked 4th Dan Black belt and is a registered and insured Self Defence Instructor with the British Combat Association. He also holds a full Instructor qualification with Iain Abernethy for applied karate. He is the chief instructor of the Genjitsu Karate Kai and founder of the annual‘Bunkai Bash’.

Rakesh is the founder and principle instructor at Kata Combat Self-Defence and Fitness. Rakesh has a relaxed yet passionate teaching style that is clear, energetic and humorous. In his classes everyone takes a healthy approach to situational awareness and the physical skills are simple and effective and are practiced so that situations conclude with successful escape.

Kris Wilder, is the head instructor, and owner of West Seattle Karate Academy and Seminar Instuctor. Kris started practicing the martial arts at the age of fifteen. Over the years, he has earned black belt rankings in three styles, Goju-Ryu karate (5th dan), Tae Kwon Do (2nd dan), and Judo (1st dan), in which he has competed in senior nationals and international tournaments.

Kris teaches seminars worldwide, focusing on growing a person’s technique and their understanding – whatever their art maybe.

Kris also serves as a National Representative for the University of New Mexico’s Institute of Traditional Martial Arts. He is also a member of The Order of St. Francis, The Order of Saint Francis (OSF) is one of many active Apostolic Christian Orders.

Even a Virtual Iain Abernethy

As Iain is previously committed, he has kindly allowed us to show some of the previously unseen video footage he demonstrated at his 2014 residential course.

To book your place at this fantastic event go to: https://v1.bookwhen.com/kick-out-cancer

Or if you can’t make it but would like to donate www.justgiving.com/KickOutCancer24

Oh the fees, none, we just ask you make a donation to the Teenage Cancer Trust.

As part of the event we are also holding a special class in which we will be doing a Sponsored Spinning Kick Class, (how many can you do in 5 x 1 minutes) we also invite you to join us with that. We have kids who have raised over £200 in sponsorship.

Anything you can do to help will be appreciated. If you can join us we will be having a blast.

For any further please details drop me an email, mike@teamblackbelt.com