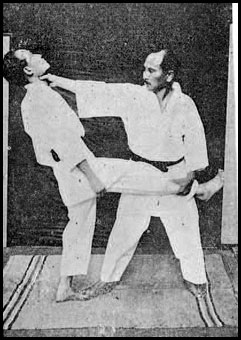 I recently posed a video on "Nodo osae"; which is a throw shown by Gichin Funakoshi in his 1925 book, Rentan Goshin Karate Jutsu. The photograph in the book has led many to surmise it is catching a kick; however, the text that goes with the photo does not support that:

Note: The cameras of the 1924 will not have been able to catch an “action shot”.

Although there is nothing to suggest it is a kick defence, there is nevertheless no mention of how the ankle got picked up! Trying to fill in the gaps, I’d guess the entry may have been as follows:

1 – Tori and Uke begin with their right foot forward (“in a reverse position”) as opposed to the more common left to left.

3 – Tori then continues to move his hands in a mawashi uke / “wax-on wax-off” fashion such that the left hand ends up in contact with uke’s punching arm. Tori’s now free right arm goes forward and pushes into uke’s throat (“immediately replace the right hand with the left while sliding the right hand up to grab his throat”).

4 – This is where Funakoshi has nothing to say, but filling in the gaps … the push to the throat drives the head backward such the uke’s weight will shift towards their back leg. Tori’s left arm – which was in contact with the initial punch – then drops down to catch the lead ankle as uke’s weight transfers off it.

5 – Once the ankle is lifted, as shown in the picture, we can then twist to “throw him down”.

The above is the only way I can see of the text and photograph being brought together. Here is the video showing the technique in action:

This week I got an email from William Wright who saw the same throw being used in the recent UFC bout between Frankie Edgar & Urijah Faber (16th of May). You can see it being used (offensively) at 32 second of the video below:

The other leg is forward, but the technique is essentially the same i.e. a high push being used to shift weight onto the back leg so that the lead leg can be lifted.

Very cool to see the same methods in both an old karate book and modern high-level combat sports.

A good video on the method as found in Judo:

Jack Slack’s thoughts on the technique:

“This knee pick has been a staple of Edgar's game for a long time. It was this technique which gave B.J. Penn fits through two fights. He'll pick it up and try for the takedown, he'll pick it up only to drop it and come up punching, or he'll grab a hold of it and drive the opponent back before kicking them in the body. It's a very versatile little technique that is certainly a good deal safer, and more compatible with the striking game, than a long shoot.”