I was recently looking at throws contained in old karate texts and decided to tally them up to get an idea of the frequency of these techniques across various sources. These were the results: 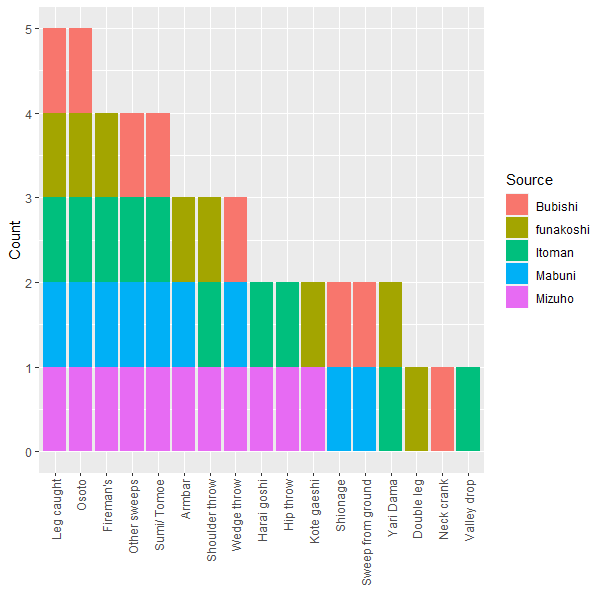 A few thing to note:

1. I wouldn't necessarily expect the frequency and types of throws in these books to be the same as those decades/ centuries prior when most of the kata were created.

2. My labeling is pretty rough. Sometimes throws are difficult to identify and you have to make an informed guess, especially in the case of the bubishi. Also, sometimes throws overlap, e.g. an osotogari neck crank combo. "Leg caught" refers to any takedown while gripping the leg either off an ankle pick or a caught kick. Valley drop refers to a rear leg takedown/ tani otoshi. "Fireman's" refers to a fireman's carry or kata guruma. Yari dama is Funakosi's spearing a ball and Itoman's single arm shoulder throw (which btw can be seen done wonderfully, to my eye at least, in these kudo highlights at 3:30  https://www.youtube.com/watch?v=yGzbzii94AI). "Wedge throw" involves placing your thigh behind the leg of the other person and throwing them over it. In some souces it is accompanied by scooping the enemie's near leg up with your far arm. The nebulous term "Other sweeps" is a catch all for differnt reaps and ashi bari. I used such a general term as I sometimes found it difficult identify the exact sweep.

3. In some cases, there are multiple sources per name. For example, I've included a fireman's carry under Funakoshi as there exists a photograph of him teaching this techniques, however it is not present in any of his books afaik.

4. I've only counted one throw per source instead of counting it multiple times if variations on the throw are shown.

5. I don't have access to all the material available on old okinawan karate so with more sources this chart could look very different.

1. Ostotgari is prevelant (along with its variations). The way in which the takedown is performed varies from source to source, Funakoshi palm heels the jaw to break balance for example. Mutsu mizuho shows multiple interesting options, the simplest of which iinvolves grabbing the throat. Mizuho also demonstates osoto from double bicep ties where he front kicks the enemy's left leg with his right and steps behind the enemy's right leg with his right to execute the throw. He also illustrates preemptavily jamming the enemy's sword draw by grabbing the hilt. When the enemy moves his left hip away, the karateka is shown stepping past the right leg and throwing the enemy. I talk more about mutsu's book here: https://iainabernethy.co.uk/content/1920s-karate-mutsu-mizuho.

2. Catching the leg via an ankle pick, single leg or kick catch was present in all sources, something which isn't often focused on in 3k karate.

3. Sacrifice throws like sumi gaeshi show up quite a bit. This is definitely not something alot of martial artists would associate with karate but nevertheless there it is. I really like this throw and although it would be potentially problematic for self protection, it's a tonne of fun and one that I've personally found consistently works pretty well even when there's a size differene.

4. Fireman's carry seems to be pretty common. I really suck with this one but I can't deny it's a cool, high impact throw and once again, not something you're likely to see in 3k circles.

Once again, this is just a rough once over and there are throws and sources I probably could have included but left out. I would be interested in any observations and if any other throws from other sources jump to mind :)

Interesting work Adam M., would it be too much trouble to add a link to the various examples?

This is a useful material for people searching for references and having everything in one place would be very helpful.

An introduction to karate do -  https://www.lulu.com/en/ie/shop/genwa-nakasone-and-kenwa-mabuni-and-mari...

Many of the throws can be seen through a simple google image search and are available online. For example, here's a blog by Jesse Enkamp with pictures of Funakoshi's throws -  https://www.karatebyjesse.com/funakoshi-9-throws-shotokan-karate/

The possible exception being Mutsu's book which is quite rare. This is unfortunate as it contains more kumite sequences than any of the other sources. I may take a more in depth look at some of the techniques from the book in the future and post some of drawings.

It saves a lot of time and confusion to have these things in one place.