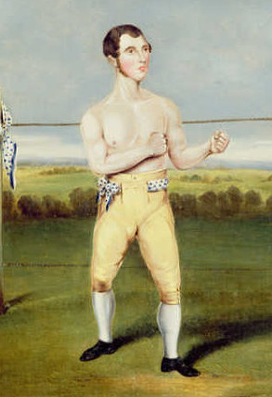 Owen Swift (1814– 1879) was a British bare-knuckle boxer who wrote the 1840’s book, “The Handbook to Boxing: Being a Complete Instructor in the Art of Self-Defence”.

Three of Swift’s opponents died in the ring. His 1838 bout with William Phelps (aka "Brighton Bill") was described as, “one of the most savage 'pieces of sport' that has disgraced the country for several years”; it resulted in the death of Phelps, saw Swift convicted of manslaughter, and it caused the rules of boxing to be rewritten!

With that background in place, I thought you may be interested in some of his thoughts …

BEGINNERS SPARRING: “At first it is very little use sparring with one who knows nothing of the art. When two novices get together, they generally deal each other clumsy thumps, productive of black eyes and bloody noses; and the result is frequently a quarrel, without being, in a scientific point of view, of the slightest advantage to either. In sparring with a professor, these unpleasant contingencies cannot occur, and the learner, of necessity must improve himself by the “set to.” The professor of pugilism takes care not to mark or hurt his pupil, and, at the same time, by the aid of science, contrives to prevent his pupil “stealing a march” upon him. Nothing disfigures a respectable man so much as a black eye. To avoid it, then, I say to novices - never spar amongst yourselves. Of course, this caution is not applicable to those who, having taken lessons and studied the art, know how to take care of themselves.”

THROWING (Koshi-Guruma into Ko-Uchi-Gake): “In struggling for the fall, endeavour to get your left arm round your adversary’s neck; this done, lift him across your hip, and jerk him on to the ground, falling with your whole weight upon him. If your adversary has sufficient strength and tact, when you have got hold of him round the neck, he will endeavour to pull you back, as soon as this attempt is made, lock your left leg inside his left leg—this will throw him back, and you will fall backwards heavily upon him.”

DEALING WITH A HEAD LOCK: “If by any accident your adversary gets your head under his arm, which is commonly called in Chancery, you have only to raise your hand over his shoulder, and lay it open across his face, holding his head back, By this means you not only render him harmless, but have the opportunity of severely punishing him with your other hand.”

PRE-FIGHT SEX (carefully worded for the sensibilities of the time!): “The training man, too, should likewise remember that as he is preparing for feats of prowess, and aspiring to distinguish himself in the service of Mars, that he must for a time refrain from exhibiting his capabilities in the softer field of Venus.”

ALCOHOL DURING BOUTS: “If the man feels sick, the second, if he understands his business, will invariably give him a little drop of brandy, or brandy and water; on no account should water be drunk alone. It may, however be used freely to rinse the mouth of the man engaged in contest.”