Ebigatama: A ground fighting technique that Funakoshi wanted you to know!

Ebigatama: A ground fighting technique that Funakoshi wanted you to know!

As many of you will know, in his book “Karate-Do: My Way of Life”, Gichin Funakoshi talked about Tegumi (Okinawan Wrestling) and its link with karate.

“Okinawan wrestling has certain unique features. As with karate, its origins are unknown, and many Okinawans suppose that there must have been a relationship of sorts between the two … The Okinawan name for our style of wrestling is Tegumi, and should you write the word, you would use the same two Chinese characters that are used to write karate's Kumite, except that they are reversed … Tegumi is, of course, a far simpler and primitive sport than karate. In fact there are few rules … The bout begins, as sumo does, with the two opponents pushing against each other. Then, as it proceeds, grappling and throwing techniques are used.”

What I want to draw out in this thread is the specific technique that Funakoshi references:

“One [technique] that I recall well was very similar to the ebigatama (leg block and three quarter nelson) of today's professional wrestling. When I watch wrestling on television nowadays, I am often reminded of the Tegumi of my Okinawan youth”

To my mind, the combination of a “leg block” and “three quarter nelson” would look something like this. 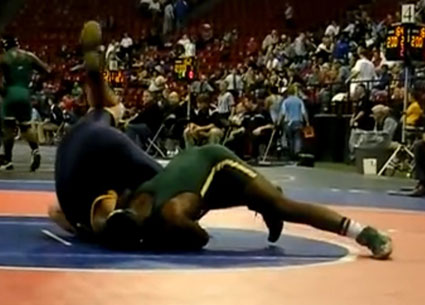 The arms are applying the three quarter nelson, while the leg is blocked in order to prevent the recipient rotating. You can see it in this video from 1:00 onward.

You can see another example of it here:

Funakoshi describes how Tegumi bouts were often decided by submission:

“To stop the fight, all that any boy who felt he had had enough needed to do was pat his opponent's body. Some boys, however, were so dauntless that they would go on fighting until they were knocked out. In such cases, it would be the duty of the referee to try to stop the bout before that happened.”

Funakoshi continues to talk about his own experience of Tegumi and how such training – aside from having a link with karate from the past – should also be also be a part of current karate training:

“Like every other Okinawan boy, I spent many happy hours engaging in or watching Tegumi bouts, but it was after I had taken up karate seriously that I came to realise that Tegumi offers a unique opportunity for training …”

I think we’d be wise to listen to the “Father of Modern Karate” and include such “old” techniques in our practise. If Funakoshi is referring to the above, here are some instructional videos that explore the technique and its variations further.

Another possibility is that Funakoshi is describing the professional wrestling hold known as “The Boston Crab” in English? If we take the technique being described to be "Ebi-gatame” – literally meaning "Shrimp hold" (エビ固め), which is the name for the Boston Crab in Japanese wrestling – then it could be this he is describing.

It would certainly fit with the “pro-wrestling reference” made by Funakoshi, but the “three-quarter nelson” reference is a little confusing.

It’s also possible that Funakoshi is referring to a knee-bar as that also goes by the name “Ebi-gatame”; as shown by this Japanese Sombo group:

From the name alone, we can’t know for sure exactly what technique, or techniques, Funakoshi was thinking of. But what we can know is that Funakoshi saw a connection between wrestling, tegumi and karate and that it was a connection to be encouraged.

What is ironic is that nowadays relatively few people would recognise such techniques as having anything to do with karate. However, if you were to practise any of the techniques showcased in the above videos, it would be recognised as being “Tegumi” by the past masters and its link to karate is unlikely to be questioned. Indeed, the practise of such techniques would be strongly encouraged.

Some cool stuff in these videos that, to echo Funakoshi, offer unique opportunities to modern-day traditional karateka.

Unfortunately I do not have an original Japanese copy of Karatedo: My way of life so I can't go and check the original text, but several things strike me about the English translation presented.

1. "Ebi gatama" is almost definitely either a typo (or it is just possible that it is an extreme colloquial variation on the pronunciation of "ebi gatame") and I would expect that it should simply be "ebi gatame".

2. The explanation in brackets about it being a three quarter nelson with leg block strikes me as something that would probably not be in the original and might have been added by the translator (a very common method when translating Japanese martial arts terms and one I use myself a lot). The term "ebi gatame" is pretty common and most Japanese readers would certianly know what was being referred to without further explanation. Of course, this introduces the possibility that the translator misunderstood the nature of the technique itself or the exact naure of what the English term refers to.

So I posit that Funakoshi was probably only referring to one technique after all and that technique was probably very similar ot the orthodox ebi gatame seen in the final video (as opposed to gyaku ebi gatame in the one above). I can very easily imagine that the translator had little grappling experience himself and probably had to look up the English wrestling term or ask someone what it was called in English and possibly got mistaken with another, different technique here. The three quarter nelson with leg block is hardly a major, mainstream technique in any style of wrestling after all and is certianly quite different to what most Japanese judoka or wrestling afficionados would refer to as ebi gatame.

I was really hoping you'd get involved in this :-)

Gavin J Poffley wrote:
The explanation in brackets about it being a three quarter nelson with leg block strikes me as something that would probably not be in the original and might have been added by the translator … Of course, this introduces the possibility that the translator misunderstood the nature of the technique itself or the exact nature of what the English term refers to ... So I posit that Funakoshi was probably only referring to one technique after all and that technique was probably very similar to the orthodox ebi gatame seen in the final video …I can very easily imagine that the translator had little grappling experience himself and probably had to look up the English wrestling term or ask someone what it was called in English and possibly got mistaken with another, different technique here.

That's massively useful and that “translators perspective” may well explain the confusion imparted by the terms in brackets. Not being a translator, the possibility of an incorrectly inserted English term did not occur to me.

Am I correct in stating that you think the leg lock is what Funakoshi was most likely referring to?

I do indeed think that Funakoshi was referring to the leg lock widely known in English as the "Boston Crab" here and that the reference to a three quarter nelson is likely to be a mistake. I can find no other reference or explanation of ebi gatame as anything other than a pure leg lock anywhere.

Another consideration is that he specifically refers to it as a pro-wrestling move as opposed to a judo or amateur wrestling (e.g. actual competitive sport wrestling) technique and the very nature of pro-wrestling means that the holds used have to be showy and easily recognisable, even to a non combat literate audience. The Boston crab fulfils this criteria wonderfully, while the three quarter nelson variation shown in the first few videos is a lot more messy looking, technical and specialised, so would probably not be a good choice.

Makes perfect sense to me! A huge thanks for that! I love threads were I learn stuff :-)

Gavin J Poffley wrote:
I do indeed think that Funakoshi was referring to the leg lock widely known in English as the "Boston Crab" here and that the reference to a three quarter nelson is likely to be a mistake.

I’m with you. I misunderstood your first post and thought you were referring to the “Sombo Knee Bar” when you said “the orthodox ebi gatame seen in the final video” which is why I asked for clarification :-)

However, the “Boston Grab” certainly fits the name and is definitely the best fit with the reference to professional wrestling. The point you make below also struck me as very valid:

It would be interesting to confirm that the text in brackets was in error. Does anyone have access to a Japanese language version? If so, do we know if there is any reference to the three-quarter nelson etc?

The translation error / faulty insertion does seem very plausible to me though.

This also makes me wonder if Tegumi bouts were sometimes about showmanship too? We have “professional wrestling” vs. “competitive wrestling” today. In the west, examples of “display bouts” in wrestling, boxing, etc. around that time were not at all uncommon. I can easily see two skilled exponents of Tegumi putting on a show at a local event … and in the process showing off their skills with the use of techniques like the “Boston crab” etc. Certainly Funakoshi sees a strong resemblance between pro-wrestling and Tegumi. Obviously the competitive non-scripted version would be the core art, but it would not strike me as unreasonable that there would be a “performance” element at times too.

I'm not so sure about showmanship on the level of modern "pro" wrestling but from the way Funakoshi talks about tegumi it is clear that (at least for him and his friends) it was primarily seen as a form of entertainment for boys and I can well imagine that would involve plenty of showboating. You can easily picture a young wrestler clowning around and trying to get his opponent into a silly looking hold like the ebi gatame (probably even followed by dragging his face through the sand a bit for a laugh!).

On a more "serious" level there are many examples of wrestling bouts put on for entertainment at mainland Japanese festivals (particularly local village festivals) so it would not be surprising to have seen the same in Okinawa too. Many believe that this kind of local village wrestling is how the art of Sumo started out many hundreds of years ago.