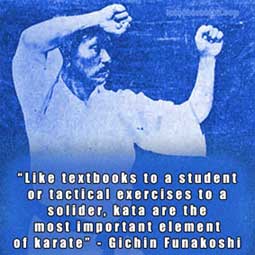 In this short article I would like to discuss the following quotation:

“Like textbooks to a student or tactical exercises to a solider, kata are the most important element of karate” - Gichin Funakoshi (The Essence of Karate).

I really like this quote because it succinctly captures what I think kata really is. Kata is NOT an imaginary fight against multiple attackers (a notion written off as “nonsense” by Kenwa Mabuni in the 1930s). What kata truly does is provide the syllabus of karate while also giving us manifest examples of the combative principles and tactics that underpin the application of that syllabus. Funakoshi’s two metaphors capture this really well.

Kata as a text book

In this analogy, kata is seen as a repository of knowledge. However, just like a text book, the information within cannot live and breathe unless it is studied, understood and applied. Owning a book – no matter how pristine the condition of that book – is useless unless the book is read.

Like a textbook, kata provide knowledge, but it’s important we also take into account one of Funakoshi’s other bits of guidance on kata:

"Once a form has been learned, it must be practised repeatedly until it can be applied in an emergency, for knowledge of just the sequence of a form in karate is useless."

So it’s not just a knowledge of the external form of the kata we need, but knowledge of how that kata should be applied i.e. the bunkai of that kata. Kata records all the strikes, locks, throws, chokes, cranks, drills etc. that illustrate the teachings of the person who made or inspired the kata. Kata give us the syllabus of karate.

When soldiers do such exercises, they are not looking to learn the detailed and exact specifics of a future conflict, but instead they are learning to act in accordance with good tactics and procedures that are most likely to lead to the right result in an ever-changing environment. They acknowledge that it is impossible to know the exact detail of any given conflict ahead of time. The specifics of conflict will never be exactly the same as the exercise, but by engaging in exercises which encourage action in accordance with good tactics the solider will develop what amount to “combative habits” which are most likely to lead to favourable action. This is exactly what kata should do.

In truth, what kata does is give a series of examples of methods based upon sound combative principles. Through the practise of those examples we, like the solider, gain “combative habits” that we should be able to freely apply in the ever-changing world of conflict.

If you want more information on the various stages of how that is supposed to work, then I’d refer you to this old article on mine on “The Four Stages of Kata”: http://www.iainabernethy.co.uk/article/four-stages-kata-practise

If you look at Funakoshi’s eighteenth precept, he again underlines the idea that kata is to be freely applied in accordance with its principles.

This is widely misrepresented as “kata is one thing, fighting is another” but that a million miles away from what Funakoshi was trying to communicate. The reason we know that is not what Funakoshi meant is because in the 1938 book “Karate-Do Taikan” Genwa Nakasone further explained all of Funakoshi’s 20 precepts, and Funakoshi endorsed those explanations. When explaining the eighteenth precept, Nakasone said:

“Never be shackled by the rituals of kata but instead move freely according to the opponent’s strengths and weaknesses”.

While the solo kata is precise and exacting (in order to foster an extremely high level of body awareness), we don’t expect to recreate the kata in its entirety, without any alteration, in live combat! Instead we will move freely, as the situation dictates, all the while acting in accordance with the combative principles encapsulated within the kata; as we have practised in our bunkai drills and kata-based-sparring.

Our solo kata will be exact and extremely consistent: Our application of that kata will be fluid and ever-changing. This is what Funakoshi is wanting us to understand via his eighteenth precept. This is also why he likens kata to soldiers’ tactical exercises.  The solider does not expect the exercise to perfectly match future conflicts, but they understand that through the exercises they will develop an understanding – hopeful an intuitive and habitual understanding, as opposed to a solely intellectual one – that will enable them to best navigate those future conflicts. Kata is exactly the same when correctly understood and practised.

In the quotation we are discussing, Funakoshi succinctly describes what kata should be. It is not a “pretend fight” but instead it is a repository of the knowledge of the experts that came before (like a text book) which provides examples of the combative principles and tactics which underpin karate. As part of our kata practise, we should seek to understand those combative principals and tactics such that they can be freely applied in a habitual manner in the ever-changing, unpredictable world of live conflict (like solders’ tactical exercises). When understood in this way, kata are without a doubt, as Funakoshi said, “the most important element of karate.”