Situated at the western edge of Naha’s great city sprawl is the Tomari Port Terminal. The ferry services that emanate from there connect Okinawa to the surrounding islands, such as “Kume and the Keramas” (1). Providing access to the South China Sea, Tomari has for centuries, been an important gateway into and out of Okinawa.

The proximity of its deep water port and its easy access to the old Royal Capital of Shuri, meant that Tomari, had an important role in the loading and unloading of commercial cargo and official tribute from the surrounding islands.

Prior to the dissolution of the old feudal kingdom, Tomari, was a centre of diversity, scholarship and commerce. Not only did financial transactions take place but educational and cultural exchange happened frequently with many different nationalities venturing in and out of the port as well as settling there. (2)

Through this vast enterprise an exchange of martial knowledge took place over many generations which led to unique combative methodologies being retained and developed by the local Tomari “Bushi”. Though many of these ways and means have disappeared in the years following the reforms introduced by Ituso Anko and his supporters, fortunately some of the key elements of the local Tomari methods have been retained and passed down for us to explore today.

The aim of this article is to explore some of these underlying themes which differentiated Tomari’s methods for those found around Shuri and Naha, and explore some interpretations of one of its defining Kata: Rohai.

“Karate” is today, a homogenous term to describe a family of styles which share a common cultural and historical heritage which originates in Okinawa and Japan proper. Prior to the turn of last century the recurring word to describe civilian fighting traditions on the island kingdom was “ti” though for those that held a strong link to Chinese arts, “toudi” seems to have been the preferred term in the common parlance. When karate was a closely guarded, backyard pursuit for a chosen few, names were not important; however, the need for standardisation became required by the popularisation movement, in the early decades of the 20th century when  introducing there methods to high level Japanese dignitaries.

Due to the arrival of Dr Jigro Kano (founder of Judo), in 1927, the premier Okinawa martial organisation, the Toudi KenkyuKai, was placed in charge of creating a demonstration of their arts. A recommendation from the Perfecture government suggested that the KenkyuKai “consider using a term that might characterize Toudi as a martial tradition more closely associated with Okinawa, rather than the existing name which accented its Chinese origins” (3). It was here that we see the formation of the now common terminology referring to the combative arts developed in the three principle population centres: Shuri (te), Naha (te) and Tomari (te).

Tomari's fighting traditions go back several generations but two most protonate teachers were Matsumora Kosaku (1829-1889) and Oyadomari Kokan (1827-1905). As contemporaries and close friends both shared the same path up the mount.

Both men were of the same social class (Peichin) and retained positions in the civil administration of the Kingdom. Both trained under noted Tomari martial artists - Uke Giko (1800-1850) and Teruya Kishin (1804-1864). Both also trained under a “Chinese” national who was residing in Tomari. There is some conjecture whether it was the same person or each found their own Chinese martial arts master (4).

There were other noted martial artists from Tomari but Matsumora and Oyadomari have had the wider ripple effect and a lasting legacy through several noted students. Three of the most well-known were Chotoku Kyan, Motobu Choki and Nakasone Seiyu. Though only Nakasone would be regarded as an inheritor of the Tomari tradition, Kyan and Motobu both learnt a great deal from these methods.

Fortunately for prosperity, we know a lot more about Kyan, Motobu and Nakasone due to their own writings and the stories of others. We can start to see some of the elements which differentiated the Tomari methods from those in Shuri and Naha.

What has been passed down about this methodology is not much but what we do know, is:

Motobu's own writings state that in Tomari “a unique system evolved, which, when compared to that of Shuri and Naha, employed a more pliable training syllabus” (5). Pliability is an attribute and concept often attributed to both Matsumora and Oyadomari’s teachings. This was also an integral part of Kyan’s strategy which he taught students to manoeuvre away from powerful attacks.

- covering and striking with the same hand;

The concept of turning a defending hand into an attacking hand is exhibited by both Nakasone and Motobu. For instance a story which has been passed down about Nakasone was that after having a verbal altercation with a local person, he was attacked a short time after in his carpentry workshop. Sneaking up on him the insulted assailant struck out at Nakasone who “was busily working with his hammer at the moment the man chose to strike. He instantly blocked the assailant's attack with the hand that held the hammer and in the same move, struck the man on the head with the hammer” (6). The importance of this concept is also backed up in the work of Motobu who once said “The blocking hand must be able to become the attacking hand in an instant” (7). This can be seen on a number of occasions within his two person drills.

- used the rising form as a means to enter and expose vital target areas and the use of gripping to control the opponent;

This again is an important element that we see exemplified by Motobu.  In his very first two person drill in “Okinawa Kempo” (8), Motobu uses this method to deflect a left punch to the face upwards, exposing the chest and centreline of his partner, where an elbow is landed on the floating ribs. This is coupled with a further concept which is to grip the limbs to provide control. At the same time as the deflection Motobu uses his opposite hand to grasp hold of the partner’s right fist. These techniques can be seen in Tomari Kata which “utilize many grasping techniques like the “twisting hand” technique in Wankan” (9).

- used a vertical rather than a horizontal fist shape when punching;

This fist shape is often said to have been developed to prevent the back of the hand being vulnerable to “a rap-with-the-knuckles strike that can render the attacker’s hand inoperative” (10). Kyan was known to have used a similar fist position and this is a common feature of one of his most famous students, Tatsuo Shimabuku, Isshin-Ryu system.

Another important source is the Kata attributed to the tradition. Though more well-known Kata such as Nihanchi and Passai were taught, though localised variation were developed and practised, several forms seem to have been unique to the Tomari area. One of these was “Rohai” of which there are several variations. Rohai provides a window into some of the concepts and skills utilised in Tomari-te.

There are two common patterns associated with the Rohai Kata. One version is common amongst Matsubayashi and Shito-ryu schools where the other is associated with Gohakuakai. Both share a common ancestry which reaches back to Matsumora Kosaku; so it is hard to identify what version is the oldest. Due to this we will focus on the version common to Matsubayashi and Shito-ryu schools. 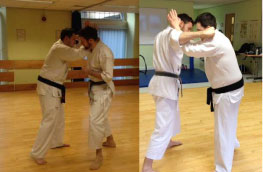 A receives B's opening attack which is a right “haymaker” punch. A responds by utilising a trained “flinch” and drives his forearms into the gap between B's shoulder and head/neck, landing the right forearm into the carotid sinus. 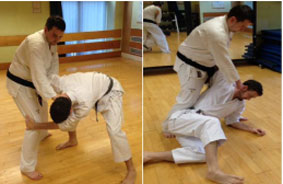 B continues his assault by dropping his head down and aims to complete a double leg tackle. A drops his weight back and down and follows B's head, redirecting his posture of to the side. B tries to drive back into A, A utilises pliability and forming a quarter nelson with his left hand on the back of B’s neck, re-directs him through and past spinning him around. A completes the defence by controlling B’s arm and punching his face. 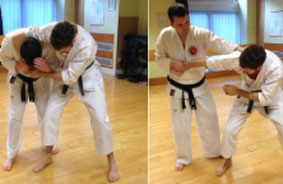 In this application B has again attacked A with a right haymaker which he has “flinched” to; unfortunately he has just managed to protect his head. B progresses to a headlock. A feels the pressure and grips B’s right wrist, A then bob and weaves his head out, elongating the arm and controlling the shoulder/head. 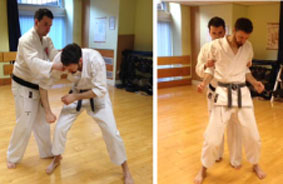 A sets up for a right handed punch to finish the fight. If A wants to control B (possible multiple opponents situation) he can progress to the next part of the Kata where he shifts behind B and controls his biceps, then by using the steps that follow, smash down into the back of B’s knees.

It is often thought that the Tomari tradition ended as a distinct branch due in part to the lack of transition between generations and that, due to a similarity to the Shuri traditions, was absorbed by it. Regardless, if we look close enough at the source materials and the Katas we can find very strong examples of what made this family of Ryukyuan combative arts so effective and is a very important window into understanding what Karate was before it was transmitted to Japan.

The endeavour to reconstruct Tomari-te may be seen by some as a fruitless endeavour in a modern age; however, the little understanding we can gain from reconstructing the past can help us understand the purpose and practise of our present and future.

(2) Kerr, George H. makes reference to the “Korean settlement near Tomari and Naha” in “Okinawa: The history of an island people”, p. 91, 2000, Tuttle Publishing.