My Experiences as a Blind Guy in the Martial Arts by Torfinn K. Opedal.

My Experiences as a Blind Guy in the Martial Arts by Torfinn K. Opedal. 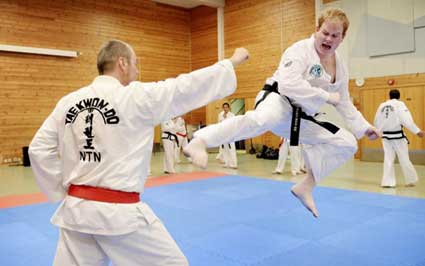 Here is a great piece from Norwegian TKD practitioner Torfinn K. Opedal. Torfinn is blind and I think you’ve find his insights and thoughts very interesting.

I first met Torfinn at a seminar in Norway. Those who have attended my seminars will know how I put great store in using both hands while close so that we can feel where the enemy is. Feeling is faster than seeing at close range and utilising proprioception (the inbuilt ability to know where our limbs are in space) is a very effective way to locate targets in the chaos of close range conflict. We see this used in kata all the time and it is why there are no “dead hands” or “guards” in kata. The hands should be active, not passive.

As many will know, as part of my teaching on this topic, I often get people to do drills with their eyes shut and most find their accuracy increases as a result because the eyes are no longer “distracting” them. I recall asking people to try a given drill with their eyes shut at that event in Norway and Torfinn smiling at me when I said it. I walked over and said, “You’ve already done this”. To which he wryly remarked, “Yeah, I’m really good at this.” Which he was. Every drill we did Torfinn performed with precision because it really is way more about feel than sight at close range. There can be few people better qualified to talk about this than Torfinn.

I’ve also have the privilege of training with visually impaired athletes during my time in judo. Because so much of judo is about that close-range “tactical feel” it was essentially the same as fighting anyone else, with the only difference being we established a neutral grip on each other before fighting.

I’m really pleased Torfinn has given me permission to post this article here. Enjoy!

My Experiences as a Blind Guy in the Martial Arts

I said I would share my experiences as a blind guy in Martial Arts.

When I started practicing Martial Arts I could see a little. This was in 2008. I practice ITF Taekwon-Do. My sight has gradually become worse and worse. In the start of 2014 I became completely blind.  In May of 2014 I graduated to first degree, black belt. This was an unbelievable moment to me! In the fall of 2014 I participated on a PDR certification course and met people that had an open and inclusive view on what was possible! In January of 2015 I attended a seminar in Oslo, Norway. This seminar was taught by Iain Abernethy. This gave me a lot of inspiration and I learned a lot! Also in 2015 I attended an International Instructor Course in Trondheim, Norway. Here I met old and new friends and learned a lot. The Grand Masters spoke to me and mentioned me at the end of the weekend. There was a tear in my eye and I felt the urge to teach even more!

During my time in Martial Arts I have noticed how I need to get things explained. I have also held some seminars for people with different disabilities. This has shown me what works and what does not work when teaching different people. What is also important to remember is that just because something works (or not) for a blind person, it doesn't necessarily work for other blind guys.

There are some things that are important. You have to be vocal. You have to explain everything with words. Another thing that usually works is to physically move the limbs of the person. If it is an exercise in pairs it may be smart to use one of the blind people to show. This helps us feel the movements in our bodies.

It is really important to respect people's disabilities and not look down on people. I've met people that look down on me and people who do not. Instructors (me included) should be open to new ideas from the people we teach. The ability to adapt is important when teaching. "Be like water, my friend." As Bruce Lee said.

Martial Arts should be introduced to as many people as possible, regardless of disabilities. It has given me much. It is a great form of exercise. It has also given me help to get out of the depression I suffered from when I lost my sight. It can give meaning and you get new friends across the country and even across the world. Martial Art may also bring confidence and safety.

I have been practicing Martial Arts for eight years and I have noticed how I can compete with people who can see.

When it is in competition my opponent and I start at given places. Then I know where they are. When they move I hear the sounds of their feet against the floor, and I hear the sound of their clothing. In ITF Taekwon-Do, as I practise we use suits that make a lot of noise which is helping.

In self-defence training I listen for heavy breathing, grunting, footsteps and yelling/cursing. My sense of hearing (with my left ear) is trained so I am able to use echo location and I may be able to hear how the attacker is moving.

In both situations I know exactly where the opponent is when we've made contact. Then it is just to throw some techniques in the direction of the opponent. If they grab me I know where the rest of their body is. I know this because I know how bodies are built in general. I know that the hand is connected to the arm and further to the shoulder and so on. The more points of contact I have, the easier it is to locate where my opponent’s parts are.