I just had to post this. It's a lovely use of stance, maai and kuzushi waza, admittedly in a dojo against a karate punch. Nevertheless it's definitely art.

We use a throw like that for Pinan Shodan and Kusanku, and for some reason I feel like Iain does, as well? Good stuff!

Yes he has a video on Sandan which uses a similar application for nukite, but with a deliberate turn to throw.

I've never been able to get the timing and distance such that it looks this effortless. It's the difference between magic and mere mortals like myself. I have a feeling it's what most "soft" arts are aiming at, the gentle art of persuading your opponent to throw himself violently at the ground rather than you having to do it. Nothing that 35 years of daily training won't fix mind you.

Nice find! The technique is very well explained and executed. The pragmatist in me has reservations about the entry (the long distance and very formal attack), but as karate vs. karate – which is after all what is shown – it’s a very good video.

Wastelander wrote:
We use a throw like that for Pinan Shodan and Kusanku, and for some reason I feel like Iain does, as well? Good stuff!

css1971 wrote:
Yes he has a video on Sandan which uses a similar application for nukite, but with a deliberate turn to throw.

There’s a few things I’ve put online which are similar, but nothing exactly like this. I’m either going around the neck (Kubi-Wa), or I’m turning in a winding throw fashion. In the video above the arm is under the enemy’s arm (so it’s not Kubi-Wa) and there is not turn (which makes it different from the Pinan Sandan stuff).

Kubi-Wa is one of “Funakoshi’s Nine Throws” and you can see a picture of Funakoshi and Otsuka doing it below. 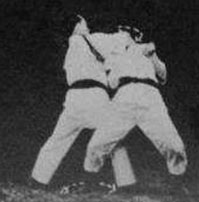 At 1:36 in the video below you can see me doing the throw.

In both Funakoshi’s picture and my video you can see how the arm is around the neck. In my case the nukite is not the throw, but part of the balance breaking for the throw.

At 0:55 you can see how I use the nukite in Pinan Sandan to contribute to broken balance before the following winding throw.

Including the video originally posted, we can see it’s just variations on a theme really … and all of it much more effective than stabbing the tips of your fingers into your enemy’s solar plexus! ;-)

The body mechanics were very good and made me think Shotokan meets Aikido.

I was thinking that at least some of the practice body movement could carry over to a more street=wise application to the Kubi-wa if the defender simply started from a neutral ready stance with the hands up.

Spaniard wrote:
The body mechanics were very good and made me think Shotokan meets Aikido.

The body mechanics are great and that’s the same for all his videos (Rick Hotton) that’ve watched. He’s very good at explaining it too and that makes for a great combination.

Spaniard wrote:
I was thinking that at least some of the practice body movement could carry over to a more streetwise application to the Kubi-wa if the defender simply started from a neutral ready stance with the hands up.

Absolutely. The mechanics would be the same, it would just be more practical in context if the technique was practised from within arm’s length.

This particular arm motion, driving up under the uke's attack to the opposite shoulder/neck region is how i envision the turn/throw in Kushanku that appears in the two sequences with the the leaning forward position.  A turn of the torso in the direction of the throw would complete that action.  In my mind this also shows the progression from the body displacement/throw applications I've seen in the pinan katas to a more damaging finish in the older more pragmatic Kushanku

Iain previously attached an old scandanavian military training video that showed a turning throw dropping the opponent on his neck and shoulder.  At first i thought it was more like a kubi-wa throw, but this clip seems to to be the missing link.

p.s. I checked and it was at 13 mins in http://iainabernethy.co.uk/content/old-finnish-military-combat-methods-video

Rick Hotton's movement is fantastic.  I've fallen a bit in love with using the nukite in pinan ni and san as threading the arm under the neck after doing a snap-down on the head (with the osae that preceeds it) for either an omote hadaka jime, or one of a number of neck cranks. My "backup" application for it is a ''bump'' across the body/neck, striking with anything from the inside of the arm to the chest.