I do enjoy your Bunkai, so thank you very much.

Thoughts on the Kiai points in Kata?

As we are lead to believe, they represent a finishing technique, expelling all of one's power at the point of impact/finishing. Q1: Why are they're generally only 2 Kiai points in most Kata (Wankan an exception in Shotokan) and with a majority of your Bunkai leaving the assailant somewhat 'disorientated'; Q2: why the need for them anyway?

Forgot where I read it, but it seems the number of kiai in kata competition has been limited to two or three at max to stop competitors from showing off too much. Just like the WKF rules prohibit too long pauses between bowing and starting the kata just for drama.

In his detailed kata descriptions in Kyohan, Funakoshi does not mention any kiai at all.

Found some more interesting thoughts on this in another forum discussion at: http://www.shotokanssecret.com/phpbb2/viewtopic.php?f=19&t=199

"Shotokan kumite is patterened on kendo, and in that sport the contestants do indeed kiai as they attack. I imagine that is how kiai entered karate, and eventually crept into our katas. "

I found that in the thread linked in the above comment.

I was taught kiai was used to startle the opponent, force yourself to breath during a fight, clench your muscles tight when being struck, psych yourself up or get your adrenaline pumping, and to draw attention to yourself if under attack.

Interesting comments, especially Funakoshi; I was referring to traditional Karate rather than 'sport' related.

One of the reasons that I was taught for Kiai was to make yourself heavier (exhailing on the Kiai) and therefore more 'solid', the benefit being to make yourself and your technique stronger.

As for why there are generally two kiai points in kata, I honestly have no idea. Chibana Chosin said that he never did vocal kiai when training with Itosu, and indicated that the kata didn't require vocalization. They may well have just been somewhat randomly assigned, or assigned to the instructor's favorite part of the kata, to give students a specific time to practice vocalization. That said, Charles Goodin wrote in his blog that his teacher, Pat Nakata, witnessed Chibana scare off an attacking dog with a vocal kiai, so he clearly had the capability, even if it wasn't part of his practice.

As for the "need" for kiai, I would say that you don't really "need" them, but they help. I remember a study, some years ago, which determined that the grunts and vocalizations of tennis players (they may have also tested other sports, but I can't remember, now) resulted in an average 7% increase in power. You may not need that extra 7%, but it also might make all the difference between an unconscious opponent and an enraged one. The contraction required to do a kiai will tighten your core, which connects your hips to your shoulders to make the transfer of energy from the floor to your strike, and that is probably why there is a power increase. There is also a psychological factor, of course--yelling can help you focus, and amp you up.

steveablack wrote:
Thoughts on the Kiai points in Kata?

As we are lead to believe, they represent a finishing technique, expelling all of one's power at the point of impact/finishing.

Q1: Why are they're generally only 2 Kiai points in most Kata (Wankan an exception in Shotokan) and with a majority of your Bunkai leaving the assailant somewhat 'disorientated';

Q2: why the need for them anyway?

I don’t believe the kiai points represent anything. Different groups do them in different places and it was only very recently that formal places were set … in the past you just did it when it felt appropriate. We therefore can’t say they resent a “finishing technique” or anything like that … and besides all kata techniques are finishing techniques ;-)

As regards to what there are “only two”, I do three in Pinan Sandan, four in Kushanku, one in Wanshu, one in Chinto, one in Bassai, etc. So it’s probably simply the case that in your linage, they decided on two for the majority of the forms as an arbitrary choice.

When it comes to need, the actual shouting does not NEED to be there, but it is useful to include.

Miyamoto Musashi summed up kiai-ing very succinctly with this extract from “The Book of the Five Rings”:

“The three shouts are divided thus: before, during and after. Shout according to the situation. The voice is a thing of life. We shout against fires and so on, against the wind and the waves. The voice shows energy.

In large−scale strategy, at the start of battle we shout as loudly as possible. During the fight, the voice is low−pitched, shouting out as we attack. After the contest, we shout in the wake of our victory. These are the three shouts.

In single combat, we make as if to cut and shout “Ei!” at the same time to disturb the enemy, then in the wake of our shout we cut with the long sword. We shout after we have cut down the enemy this is to announce victory. This is called “sen go no koe” (before and after voice). We do not shout simultaneously with flourishing the long sword. We shout during the fight to get into rhythm. Research this deeply.”

A skilfully used “battle cry” is a solid part of a combative methodology – for both psychological and tactical reasons – so it makes sense to include the practise of that in our supporting solo templates (kata).

Musahsi’s three shouts (before, during and after) can seem quite “mystical” but they are common place in conflict of all kinds. In the picture below we can see Lenny McLean (renowned bare-knuckle and unlicensed fighter) “kiai-ing” before conflict. We can also see Chuck Liddell using the third kind of kiai to “announce victory”. That ability to “go primal” is part what we are practising when we kiai in kata. 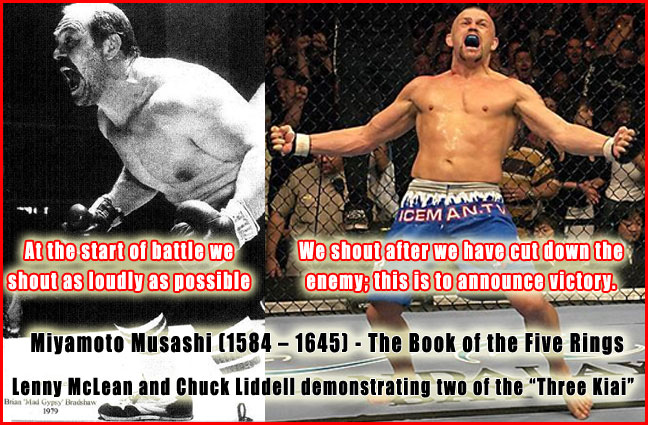 Kiai is simultaneously a simple concept in essence whilst being a difficult concept to express. However, I’ll give it a go and suggest that the first thing to get beyond is looking at “kiai” as simply being shouting.

合 = Convergence or “coming together”

My favoured definition of “Kiai” is therefore “A coming together of all your energies, in a single instant, then ensures your goal is attained”. A less accurate more “colloquial” definition could be “giving it everything you’ve got”.  It’s that inner feeling of total full commitment to the moment that is Kiai. A side effect of this feeling is the associated shout. However, the shout is not the Kiai; it is a response to Kiai (the inner feeling). It is therefore also possible to Kiai without shouting. If I were to set a bomb off there would be a loud bang. The bang is not the explosion though. Likewise, Kiai is not the shout.

The emotional, mental and physical coming together like that is kiai has the physiological effect of eliciting a primal shout. We should not confuse the “cause” and the “effect” though.

Always an interesting topic and I hope the above adds something to the discussion.