Today I came across a story which I hope you will find interesting. I think it’s a good illustration of how the correct strategy and mindset – and refusing to fight by the expected paradigm – can enable a less skilled person to defeat a more skilled opponent. 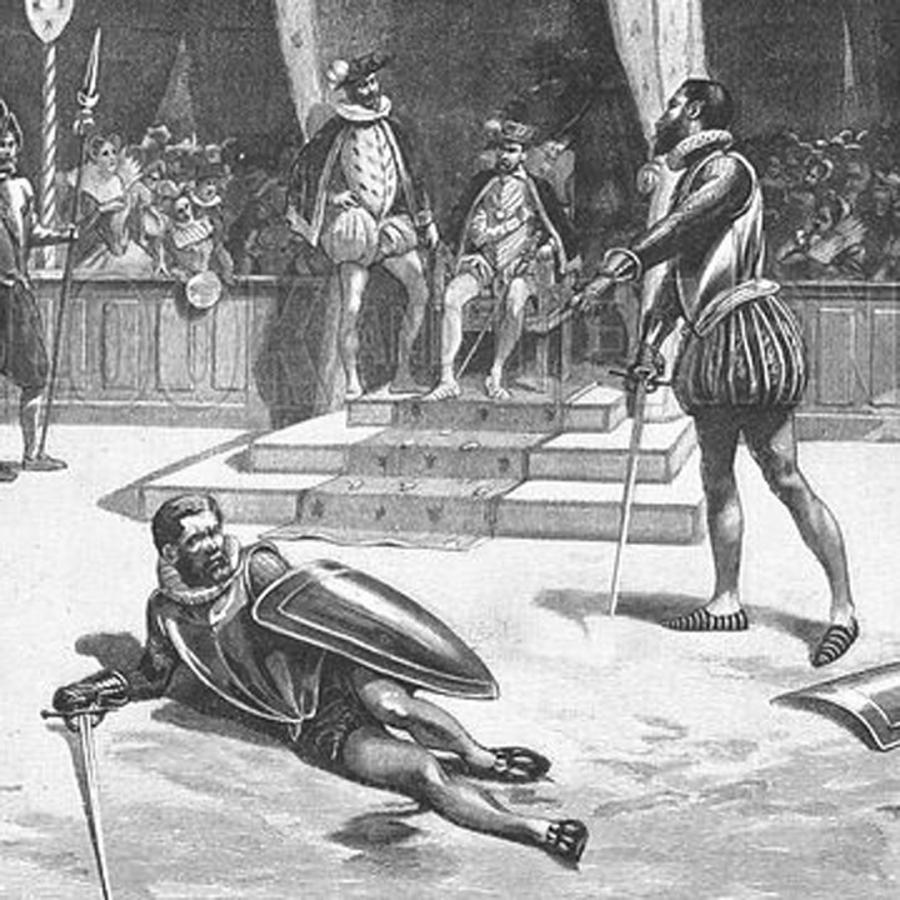 There was a significant amount of stalling from Guy Cabot de Jarnac as the type of weapons to be used in the duel was changed over 30 times. Francois de Vivonne agreed to all of the suggested weapons stating he was highly proficient in the use of all of them.

At this point, Guy Cabot de Jarnac sought out help from master fencer Captain Caizo. It was decided they would endlessly drill one single and unexpected move.

The more skilled fencer was defeated by an unexpected attack (cut to the back of the calf) delivered in an unexpected way (sprinting toward the enemy). I’m told that in fencing such unexpected “sneak attacks” now go by the label of “Coup de Jarnac”.

I think this tale illustrates a few key points:

There is often an expected paradigm.

When two people duel there is often an expectation of how this duel will play out based on rules, standard practise, and prior experience. What is often unseen / insufficiently appreciated is that the methods that prove successful are often dependent on the paradigm. Switch or alter the paradigm and the previously effective can become ineffective.

Francois de Vivonne had an expectation of the duel i.e. two combatants starting and a distance and engaging in the way that they normally engage. He does not seem to have been ready for his opponent to sprint at him and hack at his calf. Francois de Vivonne’s methods relied on the duelling paradigm. Guy Cabot de Jarnac decided to ignore the paradigm and hence he quickly defeated what everyone acknowledges was a much more skilled fencer.

We see this expectation of the paradigm in effect when modern martial artists discuss the application of consensual violence methods withing a self-protection context. They often fail to grasp they are not operating in a duelling paradigm, but instead the paradigm of criminal violence.

Criminals also their own paradigm and expectations. In self-protection, it is vital this paradigm and criminal behaviour is understood so we are better placed to act effectively (against expectation) and hence avoid harm.

A single technique drilled repeatedly can facilitate the defeat of people with a far wider skill set; especially if delivered unexpectedly.

As Bruce Lee said, “I fear not the man who has practiced 10,000 kicks once, but I fear the man who has practiced one kick 10,000 times.” There is definitely value in having a smaller number of methods drilled to a high level. Too many in the martial arts “collect” techniques without drilling any of them to the level that leads to combative competence. As per the above, there is also great value in doing something unexpected i.e. outside the anticipated paradigm.

Relating this to modern-day self-protection, this is partially why a well-practised pre-emptive strike is more effective than any other physical option. A single, well-practised method, delivered against expectation, typically has a high rate of success. Add in other factors such as action beating reaction, most self-protection students not being long-term martial artists, etc. and it becomes clear why a wide range of methods is not needed or appropriate.

Guy Cabot de Jarnac’s simple plan was delivered aggressively and Francois de Vivonne was overwhelmed by it. Again, there was no doubt that the most skilled fencer was Francois de Vivonne. However, what is crucial here is that he was not given the opportunity to utilise his skills.

Guy Cabot de Jarnac sprinted to close the gap (no initial stand-off where footwork and distance management would then become a crucial components), an unexpected attack to the leg, and then stabbing a now downed opponent. Hardly the greatest display of fencing skill, but it does show that a simple plan delivered aggressively can overwhelm greater skill.

Funakoshi’s guidance of, “Spirit first. Technique second” would seem to apply here. It also has echoes of General Patton’s “A good plan, violently executed now, is better than a perfect plan next week.”

Whatever Francois de Vivonne’s plan was, he never got the chance to enact it because of Guy Cabot de Jarnac’s violent execution of his own simple plan.

In addition to the above, this story also shows how it is possible to defat a more skilled opponent by:

Going against the expected paradigm.

Utilising a method the opponent is unfamiliar with.

Seizing the initiative and not allowing the opponent to enact their own plan.

Enacting your own plan aggressively and decisively.

Of course, the more skilled combatant will normally be the victor, but that does not mean victory is guaranteed. Relying on the paradigm, losing the initiative, and not being able to enact your own plan or use your skills can lead to defeat by those will less skill.

I think this is a very interesting tale that we can draw many lessons from. While quality of technique is important (and for the martial artist, perfection of technique remains an unattainable goal), mindset and strategy often have a greater influence on the outcome. I cover this more in the video embedded below, but this is a great historical example of the combative hierarchy in effect.

Great story and lessons.  Where did you get the primary source?

Heath White wrote:
Where did you get the primary source?

That lead to this image: https://www.lookandlearn.com/history-images/M396331/Duel-between-Guy-Cabot-de-Jarnac-and-Francois-de-Vivonne-Seigneur-de-la-Chataigneraie-in-front-of-King-Henry-II-of-France-and-all-his-court-at-St-Germain-en-Laye-1547

And then to numerous webpages in French: